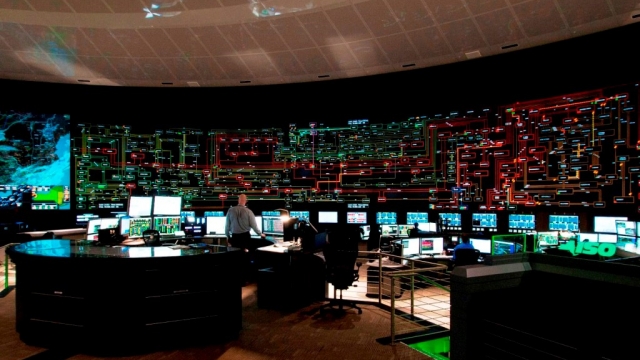 SMS
Protecting The Power Grid Through Covid-19
By Sasha Ingber
By Sasha Ingber
April 7, 2020
There are cyberattacks, financial fears for the industry, and workers who are sequestering at facilities to keep New York's power grid running.
SHOW TRANSCRIPT

Thirty-seven workers from the company that manages New York’s power grid have voluntarily left their families and homes to keep the state’s electricity flowing. They’re living in trailers and working 12-hour shifts in control rooms that get deep-cleaned to ward off the coronavirus. And there is no end date in sight for the isolated staff.

"I talk to them on the phone and it almost feels like you're at a space station... It's not exactly the comforts of home, but at least they have some privacy. And it's not completely unbearable."

The sequestering is unprecedented in the New York Independent System Operator’s 20-year history. But CEO and President Rich Dewey says it’s a necessary move because grid operators require a lot of training and can’t easily be replaced.

"You know, when you look at everything that's going on and all the trauma that's evident on the news in New York City, you know, imagine how bad it would be if the lights weren't on on top of all that," Dewey says.

"In times like this, when people are scared, they start to recognize, ‘Oh, wow, I'm really dependent on electricity in this country and it would be a problem if the lights went out, if I couldn't heat or cool my home, if I couldn't charge a ventilator, if I couldn't maintain power to a hospital or emergency care center.’ So I just think situations like this cause us to appreciate what oftentimes Americans take for granted," Chatterjee says.

In the midst of the pandemic, the power grid continues to be barraged with cyberattacks.

Can you give me a sense of how often the grid is getting attacked in an hour or in a day?

"Millions of times a day. Millions of times," says Jim Robb, CEO and President of the North American Electric Reliability Corporation. "The electric utilities have the punks, thugs and crooks that attack any interest in any industry. But in our case, because of the critical nature of the infrastructure, we have the big four international adversaries. So Russia, China, North Korea and Iran."

But Chatterjee believes the U.S. can stay ahead of the attacks.

"While certainly circumstances such as this global pandemic provide opportunities for our adversaries to try and exploit vulnerabilities, I actually feel very good that the safety and security mechanisms that we've had in place for years now really have us well prepared for this crisis," Chatterjee says.

Right now he says he has other concerns. With so many businesses closed and people staying home, the load has shifted from industry to residences. Many utility companies are pledging not to do shutoffs for people who can’t pay their bills, but that's also leading to questions about how the companies absorb those costs.

"We need to be vigilant to make sure that we don't have liquidity concerns at the end of this, when we go into the recovery for these utilities who are keeping the lights on and potentially may not be able to recover some of those costs."

Meanwhile fears of massive blackouts are emerging on social media as lockdowns continue. In the UK, a major operator caused public panic after telling customers to keep a flashlight on hand. But experts say the U.S. electric sector is used to confronting problems together, whether they’re hurricanes or pandemics.

"We've got a battle rhythm, if you will, of the industry CEOs getting together to work through common issues and working through issues with the government," says Robb. "And we started that battle rhythm about three weeks ago on the virus."