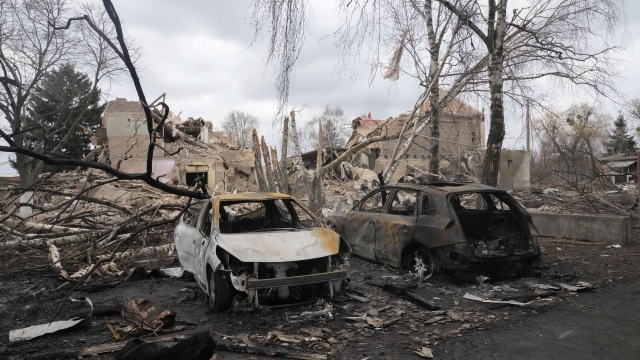 As Russia unleashes a violent and deadly invasion of Ukraine, scenes of death and destruction are bringing one phrase front and center.

Officials say the evidence of war crimes is mounting. Videos posted to social media show attacks on schools and hospitals using lethal cluster bombs, resulting in hundreds of dead civilians. War, as the saying goes, is hell. But what constitutes a "war crime"?

"Countries are supposed to target combatants. You do not target civilians," said John Bellinger, an international and national security law expert at the Council on Foreign Relations. "Targeting civilians is a war crime. Use of chemical weapons would be a war crime. We are seeing reports of attacks on schools, on hospitals, potentially on churches, you know, these are all targets that are forbidden and that would be a war crime. The attacks by the Russians appear to potentially be war crimes, and that's why we're seeing calls for investigations."

After the investigations, who prosecutes alleged war crimes? That falls to the International Criminal Court. After calls from 39 countries, it has now opened an investigation.

"The International Criminal Court is essentially like the Nuremberg tribunals after World War II and it investigates not countries, but people," Bellinger said. "Ukraine has accepted the jurisdiction of the prosecutor. You can imagine the Russians will object vigorously to this. The prosecutor will be gathering evidence and could potentially indict individual Russian officials all the way up to Putin."

What type of evidence proves a case?

"War crimes prosecutions are really hard to make," Bellinger said. "The best cases are going to be if one can show that a political leader or a military leader intentionally targeted civilians. If we find a radio communication that says 'I don't want a building standing in Kiev,' that's kind of the best evidence of intent."

Even if a war crime can be proven, the fact is there isn't much prosecutors can do.

NEWSY'S CLAYTON SANDELL: Do you have faith in the process that someone who might be guilty of a war crime will actually face justice?

JOHN BELLINGER: Unfortunately not. It's very, very hard in wars to hold people to account. Do I have confidence that all of the war crimes that may be committed by Russian forces or political leaders will ultimately be investigated and prosecuted? No, sadly not.

Despite the ICC being largely toothless when it comes to war crime prosecutions, experts say it's still important to gather the evidence because as we saw with Nazi war criminals, sometimes holding the guilty accountable can take many decades.