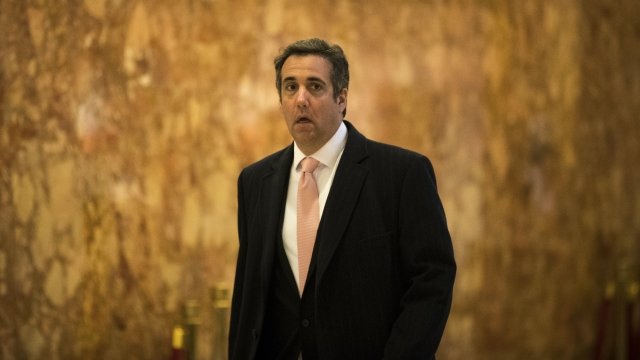 The New York Times reported investigators may file charges against the president's former personal lawyer before the end of August.

Michael Cohen's ongoing legal troubles could shape up to be a major problem for President Trump sooner rather than later. The New York Times reported Sunday investigators in New York could be planning to file charges against the president's former personal lawyer before the end of August. The charges will likely surround bank and tax fraud relating to the Cohen family taxi companies — specifically more than $20 million in loans from two banks. Investigators are also looking at whether Cohen failed to accurately report income from his taxi medallions to the IRS. Though the president presumably won't be directly linked to any of the charges, he may still be tied to the case.

"Anything involving Cohen has indirect implications because it could encourage Cohen to cooperate with prosecutors," says Princeton University professor Keith Whittington. "We know Cohen knows things that are politically embarrassing to the president. What's much less clear is whether he knows anything that's legally troubling for the president." Whittington says Special Counsel Robert Mueller likely signed off on sending the case to U.S. attorneys in New York.

"Presumably the Mueller investigators have been looking at Cohen enough to think that the stuff they saw was not directly relevant to what they were doing. Which is why they passed the case to attorneys in New York. They were things that would be relevant to a local prosecutor but not to the investigation," Whittington said.

But that doesn't mean Cohen won't work with prosecutors to strike a plea deal, and he could provide valuable information to the Mueller team investigating possible collusion between Trump's campaign and Moscow.

"Cohen could change his mind about cooperating late in the process. Charges could be brought and a trial beginning without Cohen cooperating more than he already has," said Whittington. "If I were the president, I wouldn't be confident that Cohen would be willing to go to jail before dealing information that may be harmful to the president."

The Times says there is no evidence Cohen's potential fraud harmed the banks he borrowed from or even that he failed to pay back the loans. "It helps Cohen's case in that regard. Part of what prosecutors and judges look at is whether there was potential damage," Whittington said.

"It sounds like the issues being investigated for campaign finance most directly involve Cohen himself. They're related to the president, but criminal liability is Cohen's in this case rather than the president himself," Whittington said.

While the liability may fall on Cohen, he has made it clear in distancing himself from the president that he is more open to cooperating with investigators than when he said he'd take a bullet for the president in 2017.