Portland, Maine, Embraces Asylum-Seekers As A Key To Economic Growth 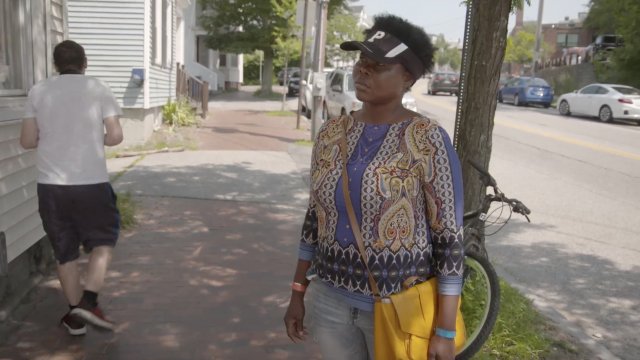 Portland, Maine, is known for its lobster rolls, lighthouses and for being in a state with a coastline longer than California’s. The city has long been a tourist hub, but for some of the world’s most vulnerable, Portland is more than just “Vacation Land.”

Manta Wewe is from the Democratic Republic of the Congo in Central Africa. She is looking for an apartment to rent in downtown Portland, and her checklist is simple.

“At the moment, I’m not worried about any luxuries. My priority is having a place to live when I leave the expo,” said Wewe.

When Wewe and over 200 asylum-seekers arrived in Portland in June, the city turned its basketball arena, the Portland Exposition Building, into a temporary shelter for the migrants. Wewe says she fled her home in the Congo to escape a forced marriage after losing her husband, and death threats from family members.

“You can't look for a husband elsewhere, you have to find one inside of your family. But the person that was proposed to me was older than me. I didn't want to stay with him. My problems started then,” said Wewe. “That's why I thought, ‘When I marry another man, they'll kill me.’”

Wewe is part of an unprecedented wave of African asylum-seekers entering the U.S. at the southern border. A majority of the migrants are from the Congo and Angola; they leave their homelands first by plane to South America. Most then travel on foot, occasionally taking buses and boats, to the U.S. It is a 10,000-mile journey that takes months to complete and, upon arriving, many of the migrants pick Portland, Maine, as their destination.

Portland is one of the whitest cities in America, and the migrants pick the city because of its reputation for being a welcoming place for immigrants. The city has embraced the migrants, largely because it needs people — specifically, it needs workers.

“Portland has attracted a lot of people from out of state, including a lot of younger people. It's a very attractive place to live. But it's not enough. It's not nearly enough. If we did not have the migrant population, all of Maine would be in natural population decline,” said Charles Colgan, a former state economist for Maine.

The city and the state are battling a workforce shortage. Maine has the oldest population in the country. The median age is over 44, nearly seven years older than the national median age. Also, birth rates in the state are declining.

Even the state’s signature industry, tourism, has started feeling the impact of the issue.

“We've reached somewhat of a tipping point in that many of our members are faced with not having enough employees. Some of them needed to close sections of their hotels because they can't maintain them properly or some restaurateurs not being able to serve lunch anymore because they don’t have a staff to provide the service,” said Steve Hewins, President & CEO of HospitalityMaine. “We could see a decline in the continued growth of this industry, which is very important sector of Maine’s economy.”

As the rest of the nation debates whether to welcome immigrants or keep them out, Portland is spending hundreds of thousands of dollars to support the new residents. In 2015, Portland started the Community Support Fund after former Maine Gov. Paul Le Page cut General Assistance funding for asylum-seekers in the state. Since then the city has set aside about $200,000 each year to assist asylum-seekers until they receive work permits and begin working. The fund helps with rental assistance, drug prescriptions and other basic items they need. Local officials believe it is the only city in America with this type of fund.

John Mabika is in his home in Westbrook, a suburb of Portland. He is also from the Congo, where he used to work as a construction foreman. He arrived in Portland in 2017 and relied on the Community Support Fund before he got his work permit and resumed working in construction.

“The biggest challenge for us was the transition period, which is like a period which you’re waiting for your work permit to come then you can start working. You’ve been someone who used to do things; to do everything by yourself, by your own, but now you will be depending on the state, on the city, to support you,” said Mabika.

In June, the number of new arrivals spiked, draining the fund. But residents rallied again, donating a total of $800,000.

“It's about the whole community stepping up to help. And we have seen from, you know, starting with the leaders and the Congolese and the Angolan community in the shelter, every day talking to these families, understanding what their needs are. Our school department stepped up and put people in to put kids into summer school classes,” said Ethan Strimling, Portland's mayor. “Volunteers are doing adult ed. It has been remarkable to watch.”

But some residents remain concerned about the financial implications of these public investments.

“Probably the biggest issue is that when they get here they’re not even legally allowed to work for six months. Them not being able to work, they won’t be able to ... they legally can’t contribute to the community in ways that they would like to or everyone would like to see them yet,” said Josh Kelton, Chairman of the Portland Republican City Committee. “So you have these kids going into the school system but no added tax revenue from these people coming in,” he added.

“A million dollars a year we spend on corporate tax breaks and big businesses, and we're like, let's do it. Why wouldn't it be same for young families, for workers?” said Strimling.

Portland has started seeing returns on its investment in immigrants.

In 2016, foreign-born residents in the metro Portland area, despite making up only 4.6% of the population, accounted for 5.1% of the working-age population and contributed over a billion dollars to the Portland metro area’s GDP. They also paid more than a million dollars in federal taxes.

Maine’s current governor, Janet Mills, overturned her predecessor’s restrictions on General Assistance for asylum-seekers. Explaining her decision in an op-ed, she wrote: “Let’s put an end to the complaints, put aside the politics, and do the logical thing — welcome a workforce that is right on our doorstep and put them on the path to employment to build and strengthen our economy.”

While Portland is eager to embrace the migrants as a key to economic growth, its new arrivals are seeking a different kind of stability.

“We’re all looking for security; for the safety. You need to be safe. That’s the only one thing everyone is fighting for,” said Mabika.