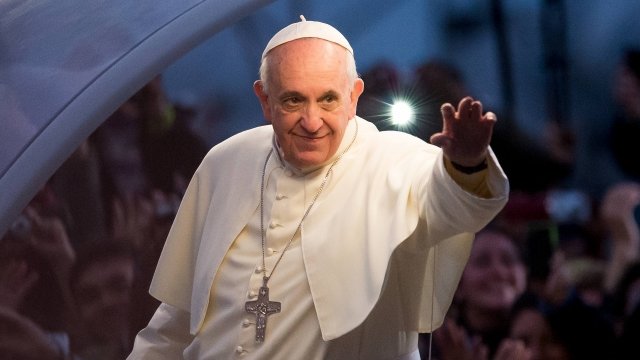 SMS
Pope Francis Reportedly Not Thinking About Resigning
By Katherine Biek
By Katherine Biek
August 29, 2018
An archbishop called for the pope's resignation in an 11-page letter published earlier this month.
SHOW TRANSCRIPT

An Italian news agency says Pope Francis is not considering resigning as leader of the Catholic Church.

The pope was reportedly "embittered" by claims Archbishop Carlo Maria Vigano made in an 11-page letter. In it, the former Vatican ambassador to the U.S. called for Pope Francis' resignation because he knew about sexual abuse allegations against ex-Cardinal Theodore McCarrick years before they became public.

McCarrick was removed from public ministry in June after an investigation found credible allegations that he had sexually abused a teenager decades ago when he was a priest in New York. Pope Francis accepted McCarrick's resignation in July.

This comes weeks after a grand jury report said more than 300 priests in Pennsylvania were credibly accused of abusing more than 1,000 children.

And the state's Attorney General said Tuesday that while he can't speak to Pope Francis, he does have proof that "the Vatican had knowledge of the cover-up."

Pope Francis previously told reporters he wouldn't comment on Vigano's claims, saying he thinks the letter "speaks for itself."