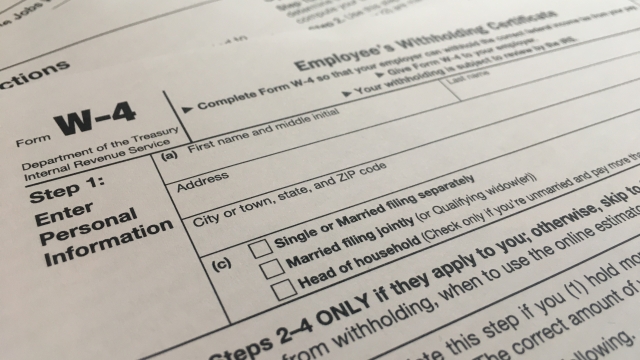 SMS
Why Poorer Americans Are More Likely To Get Audited Than The Rich
By Newsy Staff
By Newsy Staff
March 15, 2022
People making less money in the U.S. are the subject of more audits by the IRS, and the imbalance isn't expected to change anytime soon.

Doing your taxes is tedious and can be a hassle, so when it comes time for tax season, many of us think, “I’ll get around to it when I can.”

There's a lot of room for error, and the less money you have, the easier it is for the IRS to come after you if you make a mistake when filing. That's called an audit, meaning you might owe the IRS even more money later.

On average, each year after everything is filed, the IRS is short more than $400 billion in federal taxes compared to their estimates. That's why they reach back out to people to find out where that money is. The thing is, they usually start with the people who probably don’t have it.

This is because the IRS doesn’t have enough money to hire the highly trained investigators needed to dive into the financial history or go head-to-head with the high-end tax lawyers of the wealthy. Ultimately, it’s easier for them to audit lower-income people because it’s cheap, can be done by mail and doesn’t take a lot of time.

Data from the Center on Budget and Policy Priorities shows that between 2010 and 2018, the IRS enforcement budget dropped by 24% and their enforcement personnel dropped by 31%. This means the agency has less money and resources for auditing.

According to a Treasury Inspector General testimony, between 2014 and 2016, nearly 880,000 high-income people owing more than $45 billion failed to file their taxes, and the IRS is unlikely to go after them.

Audits of the rich continue to drop while audits of the poor have stayed the same. When ProPublica mapped out the audit rates for every county in the U.S., it found that the counties with the highest audit rates were the poorest.

And after all of this, these audits of "the little guy" haven't done much to reduce tax fraud overall.

This imbalance isn’t expected to change anytime soon. One study found that in the next decade, the rich will avoid $5 trillion in taxes.

So, what can be done about this?

For 2022, the IRS budget is getting a 6% increase from the previous year as part of the $1.5 trillion spending bill, but that’s down from the 14% increase it was originally expected to get. Part of this money will go toward investigative technology and the enforcement division.

With more money, there could be the potential to see more fairness in the auditing process — but only time will tell.