Pompeo: We're At The "Dawn Of A New Day" Regarding North Korea 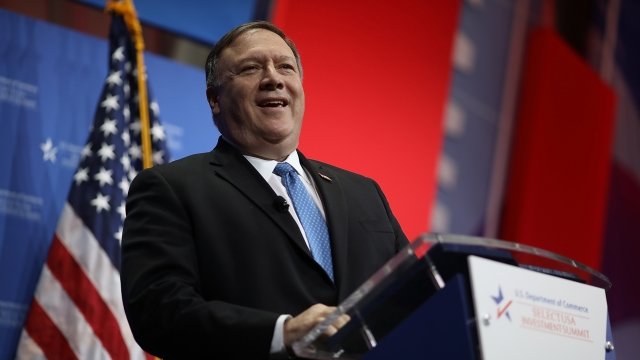 SMS
Pompeo: We're At The "Dawn Of A New Day" Regarding North Korea
By Cristina Mutchler
By Cristina Mutchler
September 27, 2018
While acknowledging progress is being made, Secretary of State Mike Pompeo cautioned U.N. members to keep enforcing sanctions on the country.
SHOW TRANSCRIPT

Secretary of State Mike Pompeo told the UN Security Council Thursday the world is at the "dawn of a new day" when it comes to North Korea making progress towards denuclearizing.

But he was quick to point out that sanctions on the country should still be enforced, saying the U.S. is aware some U.N members are violating some of those sanctions.

Pompeo also referenced the June talks between President Donald Trump and North Korean leader Kim Jong-un, which have lead the way for a second summit to possibly take place in the near future.

Still, President Donald Trump said Wednesday he's not in a rush to meet the denuclearization goal.

"I think we're really going to do something that's going to be very important, but we're not playing the time game," he said. "If it takes two years, three years or five months, doesn't matter. There's no nuclear testing and there's no testing of rockets."

Pompeo met with North Korea's foreign minister Wednesday. He's set to make another trip to Pyongyang next month ahead of that second summit.