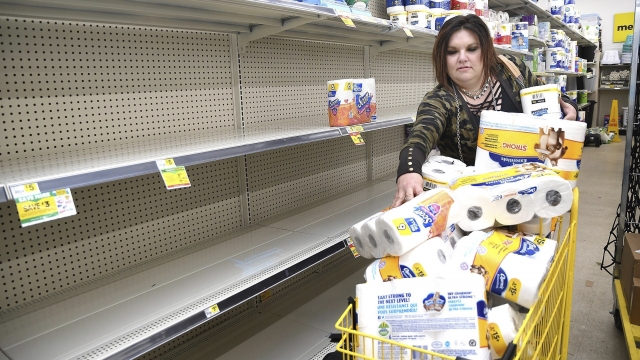 SMS
Poll: Young Americans More Likely To Panic Buy Due To Coronavirus
By Shira Tarlo
By Shira Tarlo
March 30, 2020
A new poll from Newsy and Ipsos found Gen Z and millennials are more likely to stock up on food, toilet paper and disinfectant than older people.
SHOW TRANSCRIPT

Younger Americans are more likely than older generations to buy large quantities of food, toilet paper, disinfectant and hand sanitizer because of the coronavirus pandemic.

That's according to a new Newsy/Ipsos poll released amid the outbreak.

Seventy percent of millennials and Gen Zers recently flocked to stores to bulk buy food. That's compared to 53% of Americans between 35 and 54, and 39% of Americans 55 and older. Younger people were also more likely than older adults to have bought significantly more toilet paper, hand sanitizer and disinfectant during that time period.

"One thing that this poll shows us and it shows that there are differences by age is that younger people are preparing differently for the pandemic. But also it’s a possible stress response," said Ipsos Research Director Mallory Newall. "Younger people may be feeling the stress more acutely, and this is their way of dealing with it."

Supermarkets across the country have seen empty shelves, long lines and overflowing shopping carts. Anxiety over the virus has sparked widespread panic buying — and has left stores scrambling to adjust to a surge in demand. Hoarding has become such a problem amid the pandemic that many stores have imposed limits on in-demand items like hand sanitizer and non-perishable foods.

What we also know from the poll: Young workers say they have been hit hardest by the economic fallout, with more than half reporting they've lost jobs or had their hours cut.

Psychologists say data showing young people stocking up on supplies could be a sign they're feeling the pressure of the crisis more intensely than older Americans.

"None of us have had the experience of, 'How do you best prepare for a pandemic?' But those who are older have had experiences of preparing for other kinds of emergencies, so may have an idea for what is needed, what might be most helpful," said Dr. Lynn Bufka of the American Psychological Association. "If you've never had to prepare for an emergency and you're hearing that we might need medicine, you may think, 'I need to go buy whatever I can.'"

Aside from food, though, most Americans say they aren't buying significantly more than they need. And 80% said they had not upped their purchases of medical supplies, like the masks needed by health care professionals.

The Newsy/Ipsos poll was conducted March, 20-24 2020. For this survey, a sample of roughly 2,007 adults age 18+ from the continental U.S., Alaska and Hawaii were interviewed online in English. The precision of Ipsos online polls is measured using a credibility interval. In this case, the poll has a credibility interval of ± 2.5 percentage points for all respondents.