Poll Shows Mexican Residents Are Losing Their Tolerance For Migrants 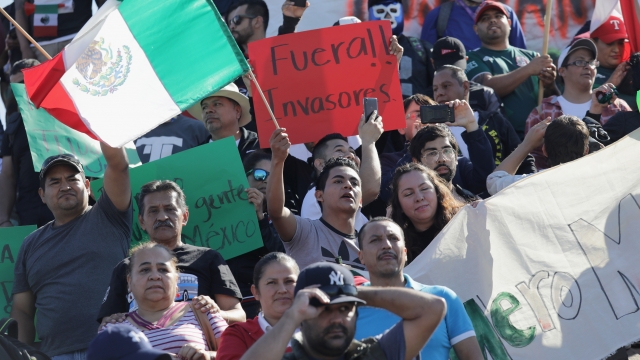 This is what an anti-migrant protest looks like ... in Mexico.

There's anger and waving of Mexican flags. And signs like this one, which translates to, "No to the invasion."

Now, a new poll by The Washington Post and the leading Mexican newspaper, Reforma, suggests attitudes in Mexico may have hardened since this protest last November over the arrival of a migrant caravan in Tijuana.

Sixty-four percent of Mexicans, nearly two-thirds, say they believe people fleeing Central America into Mexico are a "burden" that threatens to take jobs and benefits from Mexican citizens. Fifty-five percent want them deported, versus just 33% who believe Mexico should give them temporary asylum or residency. Just 7% support them settling permanently.

So Mexico is seeing some of the same nationalist sentiments that we've seen in the United States and other countries. Take this woman clutching the Mexican flag, for example.

"Go already! Go with them! You are not welcome here!"

She suggests migrants are an affront to the "patria," or homeland. And apparently more Mexicans now agree with her, a change since a Pew survey just a year ago said 57% of Mexicans believed new immigrants strengthened the country.

Tensions appear to be spiking after the Trump administration said many migrants applying for asylum in the U.S. must wait in Mexico until their cases are heard. Since April, 8,000 migrants have been sent back from El Paso to Juarez, Mexico, to await the outcome.

On Monday, the administration took an additional step, saying Central Americans passing through Mexico may instead have to apply for asylum there.

Mexico has pledged education and other support for the migrants, saying as many 40,000 jobs may be available in northern border areas. But its ambassador to the United States, Martha Bárcena, says there are limits to what Mexico can do.

"So we're working with our Central American neighbors to see what we can do so that people do not come to the border. We maybe hold people for half a year, one year, but not two years if the asylum process just goes on and on."

And while a majority supports a recent deployment of Mexican National Guard troops to combat migration, a larger majority believes that's due to the United States imposing its will on its southern neighbor — and dictating Mexico's response.