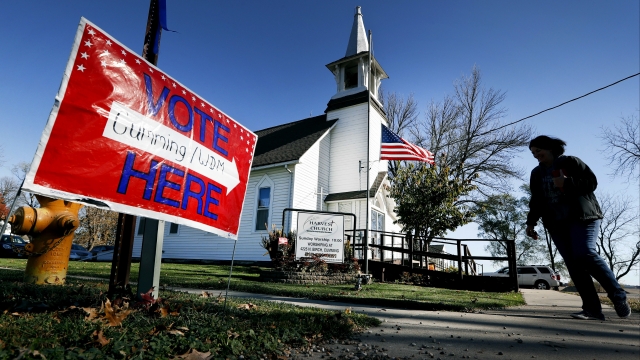 SMS
Politics And Religion: How The Two Intersect Despite A 1954 Law
By Amber Strong
By Amber Strong
January 27, 2022
The 1954 tax law known as the Johnson Amendment is meant to temper just how much religion and politics collide, but it doesn't bar all intersections.

The blurred line between politics and religion is nothing new.

Seeing politicians in the pulpit is about as normalized as seeing the pastor himself, with presidents from Clinton to Trump mentioning their relationships with the church in speeches.

However, churches and other tax-exempt organizations are not allowed to outright endorse or oppose political candidates.

"When you mix religion and politics, you get politics," said David L. Thompson, vice president of public policy with the National Council of Nonprofits.

The 1954 tax law known as the Johnson Amendment, introduced by then Sen. Lyndon B. Johnson, is meant to temper just how much religion and politics collide.

The law aims to keep money from influencing religious institutions and keep places of worship from becoming super PACs.

"There's a reason that the auditorium of all religious institutions are called sanctuaries — we are safe havens from the acrimony of partisan activities," Thompson said. "We're the only ones that can receive tax deductible donations. Someone who gives to a church knows that that money cannot be used for partisan election-related activities."

But that doesn't keep people of faith from donating to candidates individually.

According to Open Secrets, since 1990 Democrats have been the top recipients of donations from people with a religious affiliation.

The law also doesn't keep pastors from opening their doors to political messages, like one that played at 300 churches ahead of the 2021 Virginia gubernatorial race that said, "This is the first year you can vote on Sunday, so please, vote after today’s service."

Because it's rarely enforced, the law hasn't stopped faith leaders from walking the endorsement line.

Still, its opponents like former President Donald Trump want the Johnson Amendment gone completely, and the reason is simple: Religious leaders are influential, bringing about political and societal change in the U.S. for centuries.

"Those who supported the king would say, 'The Bible says honor the king. Romans 12 says respect those in authority.' And the other side said, 'But what about Moses? Oh, you know, God wants his people to be free,'" said John Vile, author of "The Bible in American Law and Politics."

"That's how it was with slavery," Vile said. "There are passages in the Bible that seem to say, you know, leave it alone, and there are others like the Exodus narrative."

But through pastors like Andrew Young, John Lewis or Dr. Martin Luther King Jr., the civil rights movement was ignited.

Today, faith leaders are still marching, with dozens fasting and praying recently to move the needle on voting rights.

Pastor Jennifer Butler, executive director of Faith in Public Life, is among them.

"We're going to be lifting that up as a faith community, mobilizing thousands of faith leaders around the country to lobby to bring their voices to the public square to make sure that the voters can indeed cast their vote when it comes time for midterm elections," Butler said.

But she says there is a difference between Christian nationalism — the belief the U.S. is a nation built by Christians for Christians — and pastors working to bring about good for all people.

"On Jan. 6, there were Christian flags flying high in that crowd," Butler said. "That was extremely disturbing to me as a Christian and as a pastor to use Christian imagery to justify violence and to justify denying people their right to vote."

Despite her dedication, the former Obama administration faith adviser says the Johnson Amendment is a good thing for the country and people of faith.

"From a faith perspective, it's actually idolatry to tie faith to full on endorsement of something that supersedes God," Butler said. "So as faith leaders, we want to be careful not to be beholden to any political party."