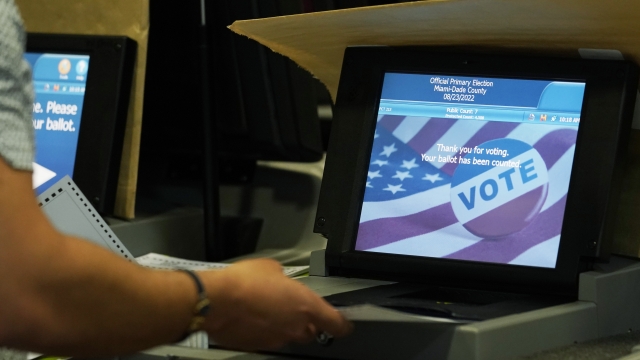 SMS
Political Campaigns Have More Data On You Than You Might Think
By Newsy Staff
By Newsy Staff
August 8, 2022
Technology and social media have increased digital footprints, meaning campaigns can know a lot about a person before they even contact them.

It's now midterm election season, and millions of voters are getting tons of emails, texts and phone calls they might not have even signed up for.

Political calls, texts and emails are spamming voters everywhere, and it’s getting easier and easier for political campaigns and causes to know exactly who they should reach out to.

While robocalls have been used in politics for decades, the growth of tech and social media giants — and an ever-increasing data footprint — means campaigns can know a ton about a person before they even call.

When someone registers to vote, they get a voter file. That includes their address, phone number and usually their email. Most states allow political campaigns to access that info.

University at Buffalo professor and political communications expert Jacob Neiheisel says many political campaigns build and grow lists, and those often snowball over time and get passed down — or sold — from one campaign to another.

Those private firms take things a step further. They're able to find out a ton of other things about people from legal, relatively public sources like credit bureaus and IP addresses.

"You are able to reach out to them on the campaign side and then give these organizations hundreds of fields of demographics from race and ethnicity, age, to things like income, education, level, hobby and interest gun ownership, whether they're a veteran or not," said Paul Westcott, L2 execuitive vice president. "Then models — are they likely to be supportive or against around 120 different issues?"

Westcott, from the nonpartisan political data firm L2, says a lot of this information may feel individual and personal, but that campaigns are often using it as part of broader efforts to reach certain kinds of voters.

"This voter, Jean Smith, is at 123 Main Street, and therefore is at this cookie, at this IP address, and this is their device ID," Westcott said. "So therefore, they are a voter. Let's say they're a high propensity Democratic primary voter, and you really want to talk to that person on election day to turn out the vote. What the campaign is going to do is going to use L2 to target not just that individual, but thousands or tens of thousands or maybe millions of people who look like that person and then be able to target them for digital advertising."

It’s a big guessing game that ties back to a revolution in data and targeted marketing. Online tech giants like Facebook and Google are able to use data on what individuals search, react to, and watch to develop a much more detailed profile about you.

Laura Edelson, a postdoctoral researcher in computer science and co-director of the New York University’s project Cybersecurity for Democracy, has seen this come up in her research.

"If you wanted to run a broadcast TV ad and you had to advertise to everyone who was watching 'Friends' or the nightly news or whatever, but platforms like Facebook introduced really narrow targeting parameters where advertisers could target people based on their interest in dogs or or in pickup trucks," Edelson said.

There are some limits here. In 2019, the Federal Trade Commission issued a $5 billion fine against Facebook for privacy violations relating to data improperly accessed by the data firm Cambridge Analytica. The firm provided data to Republican presidential candidates Ted Cruz and Donald Trump in 2016.

But most accessing of this data is totally legal, and it’s led to a push for more oversight or regulations on your personal info.

"These are very powerful tools, and in the hands of the wrong person, a very powerful tool becomes a weapon," Edelson said. "I think that's why we do need the ad platforms to be a little bit more careful about who they allow to use their platform and in what way they allow them to be used."

But for all of this work to gather data and reach out, it’s worth noting this may only swing a small number of people, which could make a big difference.

"So much of what goes on in a campaign, particularly a big national campaign, is kind of baked in," Neiheisel said. "The reason why these operations are so sophisticated is that there's so very, very little room to maneuver, and so you were really looking at the margins here. So we're putting a lot of resources into finding little tiny advantages that may or may not exist out there. You look for any little advantage you can find, and this is where the data operations come in."

So, what can a person do to protect themselves here? Edelson says she thinks this shouldn’t be an individual responsibility issue and that policy changes can offer a solution.

"Consumers shouldn't have to do so much," Edelson said. "The onus shouldn't be on them, so I think one thing that we all can do is contact our elected representatives and tell them that we support a national privacy law that would give consumers a little bit more protection from having this data gathered about them in the first place."

But in the meantime, the options are pretty limited. If a political campaign is using a larger data provider or if the message a person got actually ties to a campaign, it's probable they can unsubscribe.

Westcott says L2 has an opt-out system but that even if a person doesn't get messages from their affiliates, they're probably not out of the woods yet, especially as election day is getting close.

"There's data everywhere, and people, if you've ever donated to a campaign, and certainly if you are a high propensity voter, you are going to get calls and texts, and they're going to come from many, many, many different sources, even if you opt out," Westcott said.

So, to get out of the woods and freed from unwanted calls and mail, a person may have to go into the woods... literally.

"How do I stop the phone calls?" Neiheisel said. "Basically, it boils down to... advice you would give people going off the grid."