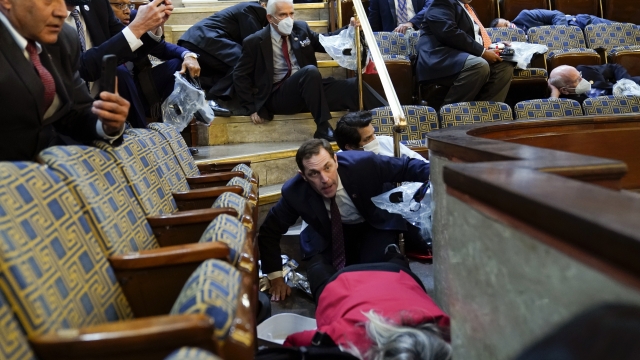 SMS
U.S. Capitol Police Appeared To Be Overwhelmed. Why?
By Patrick Terpstra
By Patrick Terpstra
January 6, 2021
The possibility of unrest at the Capitol on Jan. 6 was well known, but law enforcement was still unable to protect the building from attack.
SHOW TRANSCRIPT

Lawmakers, meeting to certify the election, had to evacuate both the House and Senate chambers after some first sheltered in place wearing gas masks.

"We were just told that there has been tear gas in the rotunda,” said Rep. Peter Welch in a video he made himself from the floor of the chamber.

The rioters seemed to have free rein.

The Capitol Police force, with more than 2,300 members, appeared outnumbered, using furniture with guns drawn to block the intruders from getting onto the House floor.

“I don't have an explanation of their failure, but there was a freaking failure," former Senate Sergeant-At-Arms Terrance Gainer told NBC News.

Two hours after the extraordinary invasion, backup from D.C. Metropolitan Police arrived to help slowly clear out the Capitol.

The acting Army secretary deployed the D.C. National Guard, but his announcement came well after the siege began.

D.C. Mayor Muriel Bowser says she had requested the guard be on hand days before.

“Let me be clear: I requested guard assistance two or three days ago,” Bowser said during an evening news conference. "That request was approved by the secretary of the Army.”

The National Guard’s initial lack of presence stood in contrast to the show of force this summer during mostly peaceful protests outside the White House.

How this massive security breach could happen is a question still without an answer for now.