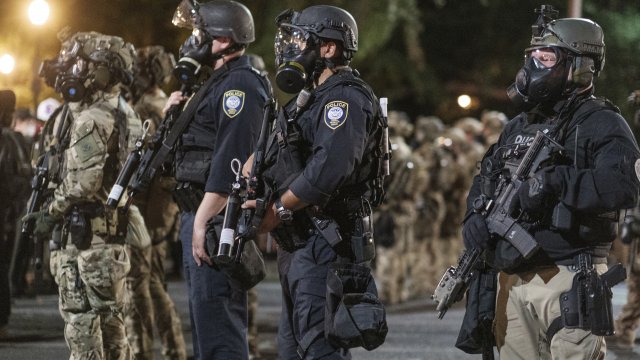 This was the scene in Portland, Oregon, on the night of July 2: Demonstrators allegedly exploding fireworks. Federal officers surging out of the U.S. courthouse. A photographer toppled to the ground.

Portland police moved to clear the streets. They did fire tear gas, days after Oregon Gov. Kate Brown signed legislation to ban the chemical agent except when a riot is declared. On this night, police made that declaration.

Every night for more than six weeks now, Portland, a liberal, largely White city, has seen demonstrations for racial equality and against police brutality. Police say the vast majority of protesters have been peaceful. But on Wednesday, they blamed a small (quote) "agitator corps" for violence, mayhem and more than $23 million in damage to the downtown.

"Aerial fireworks, mortars, M-80s and bricks were thrown at officers as they attempted to get the crowd to disperse, putting their life and safety at risk. Some businesses sustained damages and fires were lit throughout the area. All of these criminal acts put everyone at risk. We want community members to feel free to express themselves peacefully. Some of what I have witnessed tonight by a small group of individuals was not peaceful. It was aggressive and dangerous."

Ron Herndon, who's been a Portland civic rights activist for five decades, worries about the cause being set back by the turbulence. He said: "When I hear about something being burned down, that is an act that has always been used against Black people. That is a tactic that has been used to destroy Black people, not help Black people."

The American Civil Liberties Union of Oregon says police are contributing to the violence. In a June 28 lawsuit against the Portland Police Bureau and the city, the ACLU posted photos it says show police targeting journalists and protesters hit by rubber bullets.

The Department of Homeland Security has now deployed tactical officers from a half dozen federal agencies to Portland. That may be creating more confusion: Portland police say they didn't request the assistance.

Deputy Police Chief Chris Davis said: "I don't have the authority to order federal officers to do things. It does complicate things for us."