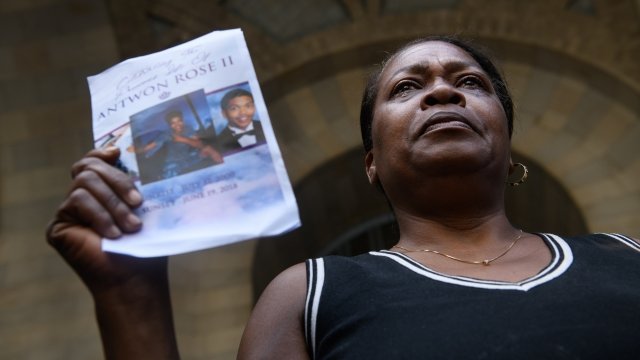 SMS
East Pittsburgh Police Officer Charged In The Death Of Antwon Rose Jr.
By Caitlin Baldwin
By Caitlin Baldwin
June 27, 2018
Officer Michael Rosfeld has been charged with criminal homicide in the shooting death of the teenager.
SHOW TRANSCRIPT

Charges have been filed against an East Pittsburgh police officer in the death of Antwon Rose Jr.

According to court documents, Officer Michael Rosfeld has been charged with one count of criminal homicide in the June 19 shooting.

As Newsy previously reported, Rosfeld pulled over the car Rose was in because it matched the description of one involved in a drive-by shooting. Shortly after the vehicle stopped, police say Rose and another passenger ran from the car, and that's when Rosfeld opened fire. According to police, guns were found in the car, but Rose was unarmed.

Rosfeld had worked as a police officer for seven years but was just sworn in at the East Pittsburgh Police Department the night of the shooting.