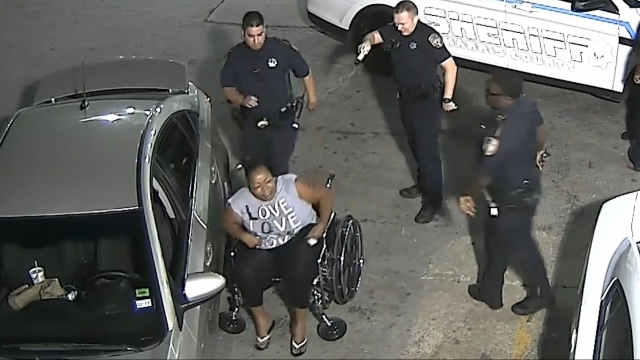 A new FBI effort to track police use-of-force incidents nationally is off to a slow start. The program leaves the decision on whether or not to participate up to the same local police agencies that are at the center of abuse allegations.

Sheketha Holman became a reluctant participant in the type of incident the FBI aims to track.  She watched from her wheelchair one evening in November 2016 as deputies from the Harris County Sheriff's Office in Houston arrested her pregnant daughter at a gas station. Holman says she witnessed officers slamming her daughter's stomach up against their police car.  When Holman began recording their actions on her cell phone, a deputy ordered her to leave.

"So I turned my wheelchair to leave," Holman recalls.

Security footage from that evening shows Holman rolling back as directed, while continuing to record from her phone. When she stopped to write something down, the video shows the same deputy, who is White, grabbing the phone away from Holman, who is African American. The deputy then tossed Holman's phone into her car and began to force her arm behind her injured back.

"I have about, probably like seven slipped discs in my back," she said.

Holman reached for the car door, but it was too late. Two more deputies swarmed in. The same deputy who had tossed Holman's phone away moments earlier is then seen on video tasing her from behind, as she sat in her wheelchair. Holman passed out and fell to the street, but she says deputies were not done with her yet.

"I'm on the ground and as soon as I open my eyes ... I'm not fighting you guys and my whole body is going again. I'm just getting tased more," she recalls.

It's the kind of incident the Justice Department said in 2016 it would have the FBI begin to track in a new national database. Officials announced that the program would ask local police to disclose every incident of use of force, while providing details such as the race of the people involved. But participation by police would only be voluntary, the FBI announced.   Four years later, Newsy has learned the Harris County Sheriff's Office has yet to provide the FBI any data.

HCSO does disclose in an annual performance report from its inspector general 2,056 use-of-force incidents the same year Holman was tased. However, the report only lists the overall total number of annual incidents and does not break them down by race, type of force, or other measures that could be used by outside researchers to analyze trends and compare the police agency against others nationally.

The Harris County Sheriff is far from the only agency that is not participating in the FBI's national Use of Force database. The FBI confirms the majority of sworn police officers in the U.S. do not work at agencies that have sent in data for its program.

The FBI would not yet disclose the names of agencies that did or did not send in data. So, Newsy surveyed the nation’s 10 largest police agencies. Only the Los Angeles Police Department and the Chicago Police Department confirmed they did participate in the FBI's new program. The New York State Police and Pennsylvania State Police said they have not yet sent in any data.

"We are currently not participating in the FBI program, and no decision has yet been made about future participation," said Beau Duffy, a spokesperson for the New York State Police.

Six agencies did not respond to Newsy's inquiries.

Robinson said that departments large and small have the ability to send the FBI the data.

"Quite honestly, you're gathering the information anyway, or at least you should be. Reporting it, to me, is not that big of a deal."

In the national conversation about police violence and race, there has been a lot of focus on arrest-related deaths. But without a national use-of-force data set, there is no easy way to know how common incidents are where people survive. It is also difficult to know if Black people are disproportionately injured during encounters with police.

An estimated 1.4 million people were sent to the hospital from 2001 to 2018 due to injuries caused by “legal intervention” — that is when authorities try to make an arrest or do something like fire tear gas at protesters. This includes about 61 injuries out of every 100,000 Black people in the U.S., compared to 13 out of every 100,000 White people. The CDC does not know the race for nearly a third of those involved in the legal intervention incidents, so it does not calculate rates of injury by race. But even if we assume that all unknown patients were White — Black people are still at least 2.3 times more likely than White people to be injured and sent to the hospital by legal intervention.

"We have to know which agencies are performing, you know, better or worse than others," said Dr. Justin Nix, a criminologist at the University of Nebraska Omaha who studies policing.

"Leaders are fearful of the data coming out saying that their agency is on top of the list," said Nix.

The FBI will make its first public data release later this summer. So far just 40% of the nation’s sworn officers work at an agency that participated. More than 16,000 police agencies, making up 90% of those operating across the country, do report to another  voluntary FBI program: the Uniform Crime Report (UCR). One big difference between the data collections: If agencies don’t "volunteer" to report to UCR, they get shut off from key federal grants. There is no such threat, Newsy discovered, for agencies who do not report to the FBI’s new Use of Force database.

"It is bothersome to me that the FBI doesn't tie it to something because basically what gets measured gets done," said Robinson, who says the Phoenix Police Department's senior leaders knew they would lose federal funding if they failed to report crime statistics. Robinson says federal officials should implement the same repercussions for use-of-force reporting. He also believes state lawmakers should cut off state grants to law enforcement agencies that don't report to the FBI.

"If Ms. Holman cannot get justice — an unarmed hobbled woman in a wheelchair surrounded by four deputies — who can?" asked Randall Kallinen, a civil rights lawyer in Houston who is representing Holman in a lawsuit against the police agency. "The Harris County Sheriff's Office must enact reforms to ensure the safety of citizens from abusive deputies who believe they can do anything. All patrol deputies and jailers must be required to wear body cameras, and excessive-force instances must be made public."

In response to multiple rounds of questions from Newsy, a spokesperson for the Harris County Sheriff's Office said this week that going forward the agency will begin disclosing all use-of-force incidents to the FBI “... effective as soon as possible. We will do so in the interest of transparency.” The Pennsylvania State Police said it would do the same by “early next year.”

"I would advocate every time a police officer puts his or her hands on somebody, that needs to be recorded," said Robinson. "It needs to be understood and it needs to be explained. To me it is not rocket science. It is good policing."

Mark Greenblatt is the senior national investigative correspondent for Newsy and the Scripps Washington Bureau. Follow him @greenblattmark or email a story tip to  mark.greenblatt@scripps.com. Nick McMillan and Rosie Cima are data reporters and can be followed @ndm_visuals and @rosiecima. You can email them at nicholas.mcmillan@scripps.com and rosie.cima@scripps.com.