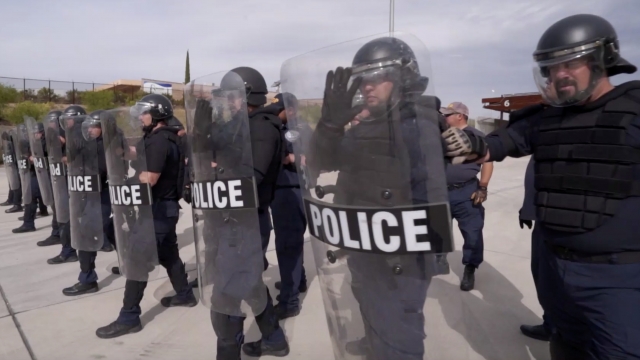 U.S. Customs and Border Protection fired four people in 2019 who were accused of being part of an offensive and secret Facebook group.

There is a national list of law enforcement officers terminated for misconduct like this, but we learned CBP does not report any of the dozens of agents fired each year for bad behavior.

"Everything from mistreating suspects, to corruption, to engaging in crimes," said Alex Nowrasteh, a scholar at the Cato Institute who has studied misconduct within the ranks of CBP.

The database provides thousands of police departments a way to check whether a potential new hire has an old record of serious wrongdoing.

One out of eight sworn officers in this country is federal, working for an agency such as the FBI, Secret Service or Border Patrol.

With no federal agencies naming names to the misconduct registry, that’s a lot people with a gun and power to make arrests who don’t have to worry about being blacklisted from another job in law enforcement if they abuse their badge.

"There are very few checks on that type of behavior," Nowrasteh said. "They could absolutely be working in another law enforcement agency. Probably not for the federal government, but absolutely for a state or local jurisdiction."

The database has records of decertified cops in 44 states.

They’re former officers whose actions were serious enough for a state to revoke their certification or license.

Federal agencies don’t decertify their officers but even though it’s called the "decertification index," the registry was designed to log all kinds of misconduct reports.

"In fact we do have records in there that aren’t just decertifications," said Ari Vidali, CEO of Envisage Technologies, the software company that programmed the database.

"If an officer is involuntarily terminated, or an agent, for misconduct, that can go in," he said. "There’s no reason we can’t have those involuntary terminations sit side by side with state decertifications. It’s just another record type."

A third of all federal officers work for CBP.

An agency spokesperson said they don’t share misconduct records with the database because of federal privacy laws.

The Federal Bureau of Prisons, another big law enforcement federal agency, tells us they actually require permission from a former employee before releasing disciplinary files.

U.S. Park Police were among federal officers forcing protesters back outside the White House last summer. The agency doesn’t provide information to the database either but will share disciplinary records with outside departments if they request them.

That assumes fired federal officers will be honest about their past when applying for a new job in law enforcement.

Now legislation under consideration in Congress would require federal agencies report officer misconduct in a new database the public could search.

The idea passed the House but the Senate has yet to take it up.

"We’d like to expand it to every involuntary termination that has ever occurred so that those who are not worthy of the badge do not get a second chance just by wandering into another state and raising their hand," Vidali said.