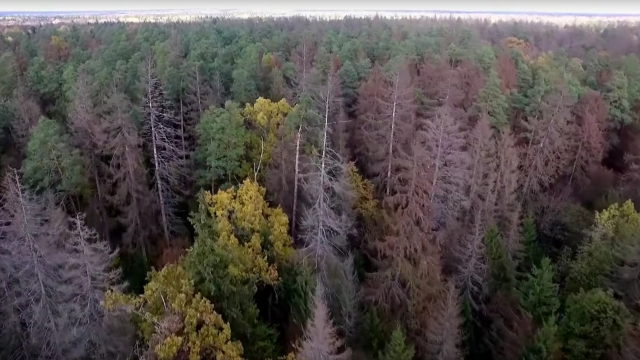 The Bialowieza Forest straddles the Poland-Belarus border. Poland's 10-year plan aims to protect the spruce trees from the European bark beetle, which burrows into them and kills them. The government thinks logging will help the bug problem.

But some scientists say the current bark beetle outbreak is a normal part of a forest's life cycle. As the spruce trees are killed, they say more resilient ones sprout to replace the old.

But most people were expecting only about 4.1 million cubic feet of the ancient forest to be harvested, so it's probably not surprising there've been protests to protect the forest since January.

And environmental groups aren't really convinced Poland has the forest's best interest in mind. In November before the plan was passed, Poland's State Council for Nature Conservation condemned the proposal, and now, some members argue commercial interests are also why more trees are coming down.

Poland's state forestry service says the current beetle invasion is the largest in decades and says the insects are attacking other trees besides spruce.

This video includes clips from Lasy Państwowe and The Nature Box / CC BY 3.0 and images from Gilles San Martin / CC BY SA 2.0 and Frank Vassen / CC BY 2.0.