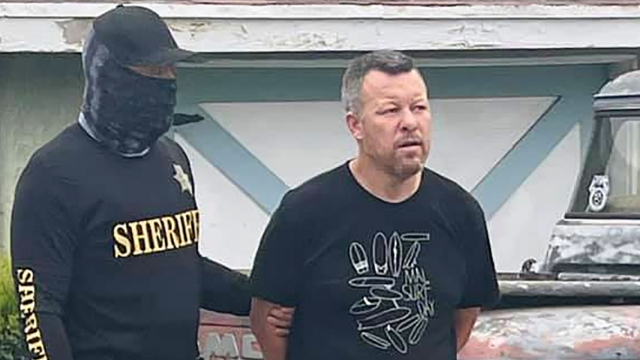 SMS
Arrest Made In California Cold Case After 25 Years And A Viral Podcast
By Peter Hecht
By Peter Hecht
April 15, 2021
A suspect is arrested in the killing of California college student Kristin Smart after a podcast on her disappearance went viral.
SHOW TRANSCRIPT

Two years ago, a local freelance journalist, Chris Lambert, set out to find the truth in a cold case that has haunted the California college town of San Luis Obispo since 1996. His riveting investigative podcast, Your Own Backyard, drew national interest and emboldened law enforcement efforts to solve an apparent murder of a 19-year-old college freshman, Kristin Smart.

Smart's body was never found, despite excavations and numerous police searches. And yet the fellow student who was last seen walking Kristin to her dorm at Cal Poly San Luis Obispo after a party had remained in plain sight. Over the years, police would call him a person of interest, then a suspect, then the prime suspect. Smart's family even filed a wrongful death suit against him. He said this in a deposition:

"On advice of my attorney, I refuse to answer that question based on the Fifth Amendment of the United States Constitution."

This week, 44-year-old Paul Flores, who was 19 when Smart disappeared, was arrested and charged with first-degree murder in her death. Flores' 80-year-old father, Ruben Flores, was charged as an accessory after-the-fact. Authorities say he helped his son hide her body.

San Luis Obispo District Attorney Dan Dow said Wednesday that authorities have new evidence - and now new leads on where Smart's remains may be. He said they believe Flores killed Smart during a rape or attempted rape in his college dorm.

"Significant new information has come in to the sheriff's office that we reviewed over the last two years, and some very important information just a month ago," Dow said. "We've got physical evidence. We have witness statements -- things that in our view, in the totality, have brought us to the point were we believe we can go forward and prosecute Mr. Flores for the murder of Kristin Smart."

Authorities say the Your Own Backyard podcast, including Lambert's exhaustive interviews with people who saw Smart on her last day alive, helped advance the case. Paul and Ruben

Paul and Ruben Flores made their first court appearance on Thursday. In a statement, the Smart family praised the arrests after years of "unrelenting and unforgiving pain." But they expressed outrage that "a father and son could have withheld this horrible secret for over 25 years -- denying us the chance to lay our daughter to rest."

On campus, Cal Poly students held a vigil for Kristin. None of them had even been born when she disappeared long ago.