Play Coming To U.S. Aims To Connect With Queer Youth, Their Parents 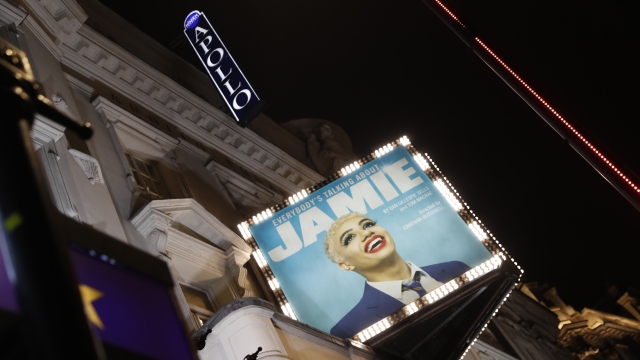 SMS
Play Coming To U.S. Aims To Connect With Queer Youth, Their Parents
By James Packard
By James Packard
February 17, 2022
"Everybody's Talking About Jamie" is the tale of a teenage boy who dreams of being a drag queen, and it's inspired by a real-life person.

Tom MacRae probably never thought a 16-year-old boy in a dress would so profoundly change his life.

NEWSY'S JAMES PACKARD: Does this feel like something tangibly different with this story?

MACRAE: Yes, it does.

MacRae wrote the lyrics for a musical that has rocked London's West End, and it has just landed in the U.S. Now it's gearing up for a revolutionary tour to Broadway.

"I hope that's something we can do," MacRae said.

"Everybody's Talking About Jamie" is the riotous tale of a teenage boy who dreams of being a drag queen and wants to wear a dress to his prom.

It's inspiring, heartwrenching, and potentially game-changing for queer teens.

"Maybe that was someone who watched this, and it just changed how they feel about themselves the next day, and that for me would be... the biggest accolade."

And it's not pulled out of thin air.

Jamie Campbell is the real-life inspiration for the show.

In 2011, his story catapulted his small English town onto TV screens across the nation. It rallied a school around the kid who felt like the outcast.

MACRAE: When we watch the documentary we thought, 'Oh my god, this is amazing. That's a song. That's a song.' There's so many moments that just sang. We made Jamie Campbell. We fictionalized him into Jamie, kept his mom Margaret in the story, and I made it for the other characters because the documentary was allowed to follow him into the school, so we didn't know what happened there.

PACKARD: Tell me what the real Jamie has felt.

MACRAE: For me, I always think of them when we're doing anything like this. In 2016, we'd written the songs, we've written the script, and we invited Jamie to come to dance studio in Hackney in east London. It's a beautiful studio, and that's where we've written the songs and recorded the demos, and we played everything for Jamie. And at that point, he knew there was a musical, but he didn't know the scale that we intended. I think he thought it'd be, like, three actors in a piano in the top room of a pub. He didn't realize it is going to be a full band, cast of 30, you know, like a proper production. And he was genuinely floored by it, and I mean, at one point he kind of fell on the floor.

It’s a story, too, of parenthood and a generational divide in understanding sexuality.

Jamie’s father told him in a message that he doesn't want to see him again.

MACRAE: I don't think Jamie would mind me saying this, but that's the last contact he's had with his dad since... He don't try to be awful. He's just limited in his ability to accept and to look beyond his own expectations of his son and his own life.

PACKARD: You don't know what you don't know, and a lot of times there are things that you learned when you were a kid and held as truths throughout your youth sort of stay implanted in your mind in your older age. And I think for anybody who's come out to their parents or who's had a conversation like that, it's something that you have to to some degree sort of understand. Yeah, we're coming from a very different sort of foundation and that it may be hard for them to make the leap.

MACRAE: Yeah and... I'm not a parent, but I Imagine parents all have allowed themselves to fantasize about the child. They're going to have that first football match, the school plays, the first holiday — that's all going to be so amazing. And then this kid appears, and they don't like football, and they forget their lines and on the holiday, they just scream all the time. The parent has to go, 'Okay, I have to readjust my expectations because their life is is is theirs to be lived."

The story is also adapted into a film.

It's trying to bring that reality to the coming-of-age genre.

"I don't know how you could put anything above the love for your child if you're a parent, but that's what happens," MacRae said. "So I guess it's trying to kind of understand, but not excuse, why someone would do that because in the end, it is indefensible. But in their head, I'm sure they feel quite rational."

The show is filling seats at the Ahmanson Theater in Los Angeles.

It's the first stop for the show in the U.S., but it's hardly the last.

"It's really down to the audience and down to the critical responses in the social media buzz," MacRae said.

It's a surreal journey for a man getting used to being part of something this extraordinary.

"My idea was everyone has a dress that they want to wear, but they can't," MacRae said. "Jamie's is literally a dress, and it's about going out in public, but we all have something. We always wanted to feel like it was happening on the next right down from you, that these could be your neighbors, if not literally your son, your mother, but someone else's son that you knew and that you'd be able to see yourself in Jamie."