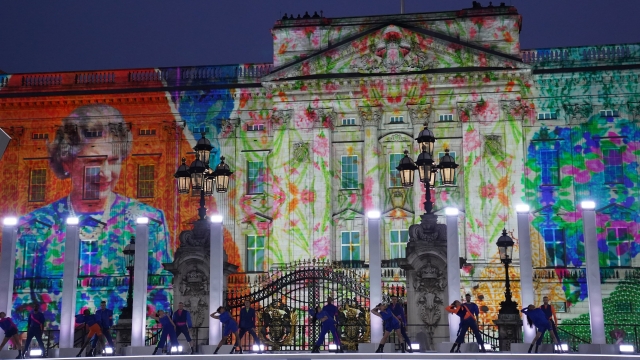 She was accompanied by other members of the Royal family including her daughter Zara Tindall and her daughter's husband, former England rugby player, Mike Tindall.

The sovereign opted not to attend the Epsom Derby on Saturday.

The Royals appeared in the royal box to crowds cheering and waving Union flags.

The queen is widely known as an avid horse lover, and she has only missed the Epsom Derby a handful of times during her long reign.

On Saturday, five of her former racehorses were paraded, and 40 jockeys who have ridden for the queen formed a guard of honor before the national anthem was played.

It was the second time in as many days that the queen's mobility issues have robbed crowds of a chance to see her.

Later on the day, Prince Charles and his son Prince William honored the past and looked to the future as they paid tribute to Queen Elizabeth II at a star-studded concert outside Buckingham Palace celebrating the monarch’s 70 years on the throne. Diana Ross, rock band Queen, Duran Duran, Alicia Keys and others performed in front of some 22,000 people gathered on the Mall for the open-air “Party at the Palace,” which rounded up the third day of a four-day holiday weekend dedicated to celebrating the queen’s Platinum Jubilee. Again, the 96-year-old monarch did not attend the concert, but she delighted the crowds when she appeared in a surprise video recorded with an animated version of another British national treasure: Paddington Bear.