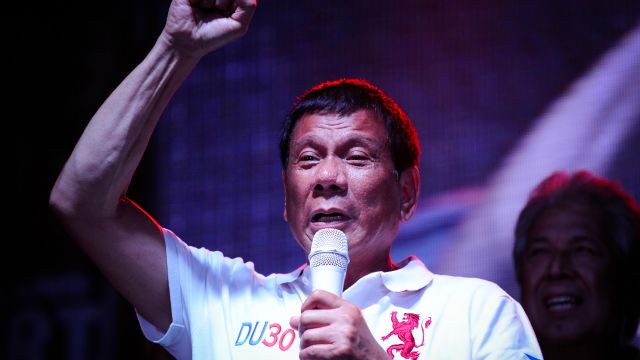 In a nationally televised speech Saturday night, the next president of the Philippines encouraged people to shoot and kill drug dealers that resist arrest.

According to Al Jazeera, Rodrigo Duterte said, "Please feel free to call us, the police, or do it yourself if you have the gun — you have my support," adding, "Shoot him and I'll give you a medal."

If you're familiar with Duterte at all, you may not be surprised. Prior to clinching the nomination as president, the former Davao City mayor pledged to execute 100,000 criminals if elected.

But drug dealers and criminals aren't the only ones whose lives may be at risk in the Philippines. A local newspaper reports Duterte recently threatened journalists, too. He reportedly told a crowd in his hometown that, "Just because you’re a journalist, you are not exempted from assassination, if you’re a son of a bitch."

Duterte, who's been dubbed the "Trump of the East," is a confessed murderer himself.

But apparently supporters like his tough-on-crime attitude. Duterte was elected president May 9 after winning about 39 percent of the vote. He's set to be sworn in June 30.

This video includes images from Getty Images and clips from GMA News and Public Affairs and BBC. Music provided courtesy of APM Music.