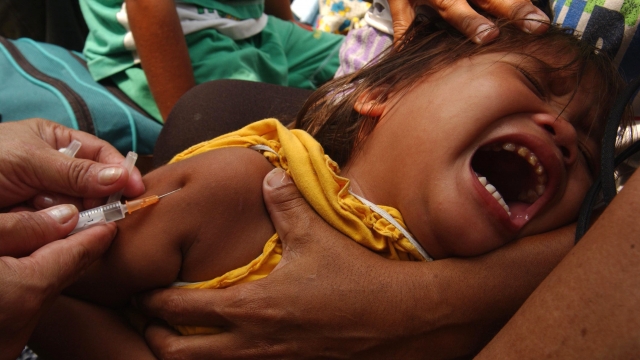 SMS
Philippine Health Officials Raise 'Red Flag' Over Measles Outbreak
By LeeAnne Lowry
By LeeAnne Lowry
February 7, 2019
The Philippines has seen a sharp uptick in measles cases, with more than 1,800 cases reported in the first month of this year.
SHOW TRANSCRIPT

The Philippines is enduring a massive measles outbreak in its capital, but now the country says the epidemic has expanded.

The island nation saw more than 1,800 measles cases in the first month of this year — a 74 percent uptick compared to the same time period last year. According to a Department of Health declaration, one part of the country recorded a more than 5,000 percent increase in cases.

While the outbreak was originally only in the nation's capital of Manila, the Philippine Health Department raised a "red flag" for surrounding areas on Thursday.

Measles cases have been on the rise in the Philippines due to a major vaccine controversy over the past three years. In 2016, the Philippine government ran a program to vaccinate a million children to combat dengue, a serious mosquito-borne illness. But the next year, the manufacturer disclosed that the vaccine could, in some cases, actually make the illness worse.

Although the program was shut down, public distrust led to a sharp decline in vaccinations altogether.

Lack of vaccination is especially risky when it comes to measles. The CDC says the virus is so contagious that if one person has it, 90 percent of the people in close contact to that person who are not immune will also become infected.