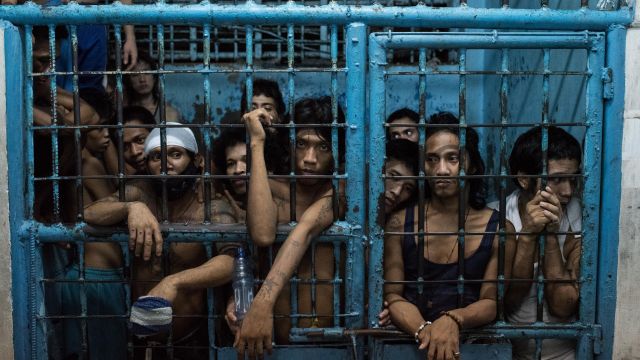 SMS
Philippines' Duterte Claims Trump Praised His 'War On Drugs'
By Jake Jones
By Jake Jones
December 3, 2016
The United Nations and others have called the Filipino drug policy a violation of human rights.
SHOW TRANSCRIPT

Duterte says during their phone conversation, the U.S. president-elect claimed Duterte is taking care of drug use "the right way." Trump hasn't yet responded to that.

But the Philippines' so-called drug war, led by a man whose people have nicknamed "The Punisher," has been at the center of controversy for months.

SEE MORE: Duterte Dares Those 'Big On Human Rights' To Probe His War On Drugs

The drug of choice in the Philippines is a crystal methamphetamine known locally as "shabu." An estimated 1.3 million drug users live in the country, which would be roughly 1 percent of the island nation's total population.

In the six-month campaign, police records show more than 4 million homes were visited and more than 800,000 people registered as drug users and dealers.

In an interview with Filipino citizen journalism website Rappler before his presidential bid, Duterte said: "I must admit I have killed. ... I killed about three people."

Speaking of those who would hurt his country, he said: "If I have to kill you, I'll kill you. Personally."

There have also been more than 5,600 drug-related deaths during the anti-drug effort. Police committed less than 2,000 of those; the rest were the result of vigilante executions, which often happen in the street.

Critics argue that Duterte's inflammatory language could be responsible for those executions. Some have accused the country of human rights violations.

But that response doesn't appear to have changed how the Philippines deals with its drug problem. Duterte says he intends to extend his war on drugs for another six months.