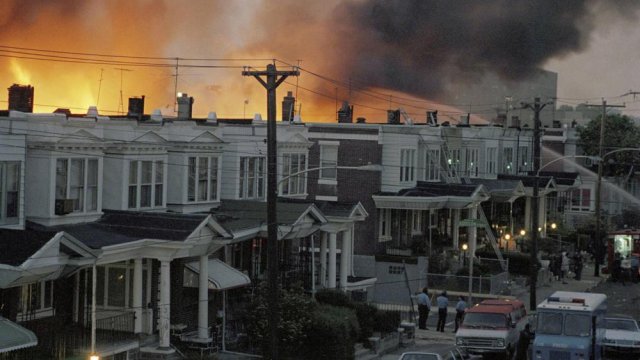 SMS
Philadelphia MOVE Victims' Remains Found, Weren't Cremated After All
By Alex Arger
By Alex Arger
May 15, 2021
The remains of victims of a 1985 police bombing in Philadelphia turned up at the morgue after complaints that they had been discarded.
SHOW TRANSCRIPT

Philadelphia's mayor says the remains of victims of an infamous 1985 bombing have been found at the city morgue - hours after a top official resigned amid criticism that he had them disposed of them in 2017.

Health Commissioner Thomas Farley resigned on Friday - on the 36th anniversary of Philadelphia police bombing the headquarters of the Black organization called MOVE. The '85 incident killed 11 people, including five children, and triggered a fire that spread to more than 60 homes.

Farley was roundly criticized in recent days for having ordered the remains to be cremated and discarded - without notifying family members. But later Friday, officials discovered that no one ever carried out his 2017 order.

In a statement, Mayor Jim Kenney said the remains of the MOVE bombing were found untouched in a box at the medical examiner's office.

Earlier, Mayor Kenney had criticized Farley for lacking empathy for seeking to dispose the remains without family notification.

"That's sad and it's unacceptable, and it's again, as soon as I learned about it, we went into action and tried to get the conversation going and try to come up with some appropriate action," Kenney said.

But now, he says: "I am also very sorry for the needless pain that this ordeal has caused."