Peyton Manning's Rough Start Is (Sort Of) Cause For Concern 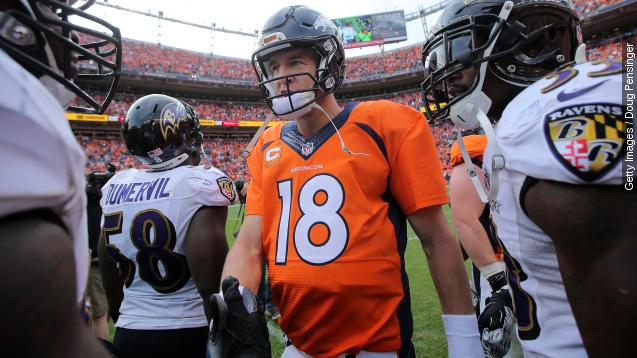 After Peyton Manning's rough opening to the 2015 NFL season, many have speculated that the 39-year-old 5-time MVP is running out of steam.

Peyton Manning's been an NFL staple since he was the first overall draft pick 1998. But many believe his playing days are numbered.

"He did not seem like himself. Father Time seems to be knocking on his door," Stephen A. Smith said on "First Take."

"I don't believe Peyton Manning is done in my heart, but I think he's going to have to show it sometime early this season," NFL Media columnist Mike Silver said.

Those are pretty strong words about the 39-year-old five-time MVP, but it's hard not to be pessimistic after his rough outing to open the 2015 season.

Even though the Broncos won, Manning completed just sixty percent of his passes for 175 yards, no touchdowns and an interception. He's failed to throw a touchdown in three of his last five regular season starts.

Before that, Manning tossed at least one score in 51 consecutive regular season match ups.

"Mentally, he's there. Physically, he's washed," Jemele Hill said on ESPN's 'Him & Hers.'

It's only natural that a body would break down with age, but it's still a little jarring to see the quarterback, who had never missed a start due to injury in his first 13 seasons, listed on this week's injury report.

Even Manning himself was taken aback when he found out he was listed as probable with a sore back.

"I was kinda surprised I was on it, to tell you the truth," Manning said.

But that's been more common for Peyton as of late. He missed the entire 2011 season after receiving spinal fusion surgery, and Fox Sports reported Manning battled through an injured quad muscle for the final month of last season.

But with all that, Peyton still had a solid season last year, and age likely isn't the only reason for his sluggish start this year.

He's lost two of his favorite targets in Wes Welker and Julius Thomas and two of his offensive lineman were making their NFL debuts.

Not to mention the Broncos offense had a tough week one contest against the stout Baltimore Ravens defense.

But if anyone can figure out a defense it's Peyton Manning. He's considered by many to be one of the greatest quarterbacks in NFL history. That should still count for something.