Venezuelans' Plan To Overthrow Their President Has Hit A Snag 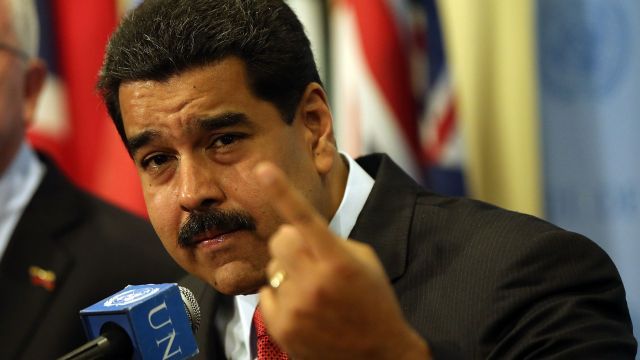 SMS
Venezuelans' Plan To Overthrow Their President Has Hit A Snag
By Matt Picht
By Matt Picht
October 21, 2016
The government claims fraudulent signatures were used on a petition to recall President Nicolas Maduro.
SHOW TRANSCRIPT

Venezuelan President Nicolas Maduro has blocked a recall campaign against him.

The government says it suspended the campaign due to reports of fraudulent signatures on the petition used to trigger the referendum.

The first part of the referendum involved the opposition collecting signatures from 1 percent of voters in 24 states; the government alleges some of those signatures came from dead or illegitimate voters.

The opposition was gearing up for the next phase of the referendum, which would involve collecting 4 million signatures next week, to get a recall vote against Maduro on the ballot.

This is really bad for Venezuela's opposition parties; they needed the recall vote to take place this year in order to throw the ruling socialist party out of power.

A successful recall against Maduro this year would trigger a new presidential election, giving the opposition a shot at the presidency. But if the recall takes place in 2017, Maduro's vice president will finish his term before the 2018 elections.

In a related ruling, several key opposition leaders in Venezuela have also been banned from leaving the country. The Wall Street Journal speculates this is to keep them from appealing to the international community for help.

SEE MORE: Bus Drivers In Venezuela Are Slamming The Brakes In Protest

A severe economic crisis and shortages of goods threaten the once-popular socialist regime, which has been in power for 17 years. Maduro has blamed the crises on a capitalist conspiracy to overthrow him.