Establishment Democrat Perez May Run For DNC Against Ellison 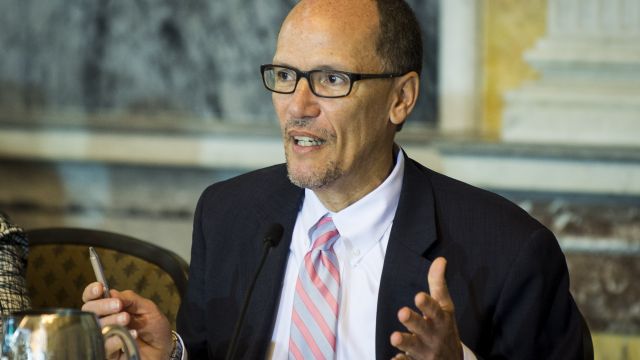 SMS
Establishment Democrat Perez May Run For DNC Against Ellison
By Jake Jones
By Jake Jones
December 14, 2016
Labor Secretary Tom Perez is rumored to be preparing his bid to challenge the progressive wing's Rep. Keith Ellison in the DNC race.
SHOW TRANSCRIPT

President Obama's labor secretary, Tom Perez, is rumored to be ramping up his bid to chair the Democratic National Committee.

Perez has worked within government most of his life and is an advocate for both a higher minimum wage and paid parental leave.

He's also been a civil rights advocate and has gone after discriminatory voter ID laws.

The current front-runner for the job, Minnesota Rep. Keith Ellison, hails from the progressive wing of the party. He was an early backer of Sen. Bernie Sanders' primary challenge to Hillary Clinton.

He's been endorsed for the role by the AFL-CIO and Sanders himself, as well as establishment Democrats like Sen. Chuck Schumer.

SEE MORE: Who Will Lead The DNC?

But Ellison took a hit when he was called out by the Anti-Defamation League, which claimed some of his comments about Israel were anti-Semitic.

His supporters brush this aside as a smear campaign against the first Muslim member of Congress.

These distractions seem to have opened the door for Perez, whose Dominican family heritage and past labor advocacy gives him a unique platform to reach both Hispanic and white working-class voters.

But Perez's candidacy might not sit well with the progressive left due to his support of the Trans-Pacific Partnership and other centrist Obama administration initiatives.

Whoever is chosen will have to bridge the gap between establishment Obama-types and the progressive wing of the party led by Bernie Sanders and Elizabeth Warren.

DNC members will vote on their next chair in late February.