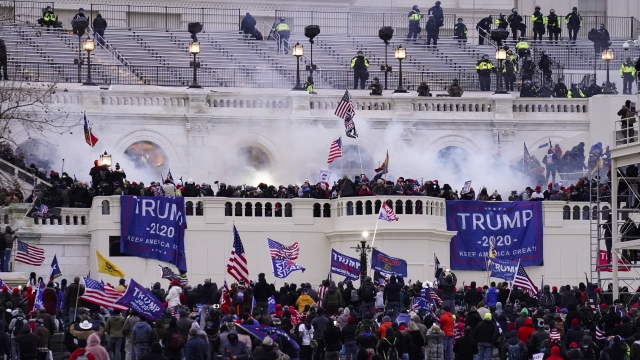 But, according to previously undisclosed documents obtained by The Association Press, help was slow to come. Despite Pence's call to acting secretary Christopher Miller from a secure location, rioters remained in control of the Capitol long before National Guard reinforcements arrived.

According to The AP, the chairman of the Joint Chiefs of Staff told Pentagon leaders: "We must establish order." But with President Trump apparently not engaged, it took hours to do so.

The disclosure come as Congressional leaders are demanding that Pentagon leaders account for their decision-making that day -- amid questions over whether they also failed to take seriously known threats of violence.

The Jan. 6 events accelerated after the former president gave his speech to a crowd of at least 10,000 supporters and told them to march to the Capitol. Violence escalated, with then-Capitol Police Chief Steven Sund asking for National Guard assistance at 1:49 pm. And at 2:10 pm, Sund called again to send more Guard members.

It wasn't until shortly after 3 p.m. that Army Secretary Ryan McCarthy gave verbal approval of the 1,100 National Guard troops that would support the D.C. police.

But leaders still struggled to execute the plan. It wasn't until 4:30 p.m. -- after President Trump tweeted to supporters, "go home and go in peace -- " that the military plan was finalized and approved, the AP reported. Guard members in riot gear began arriving at 5:20. The Capitol was declared secure at 8 p.m.