Pence Reaffirms Commitment To NATO But Tells Members To Pay Up 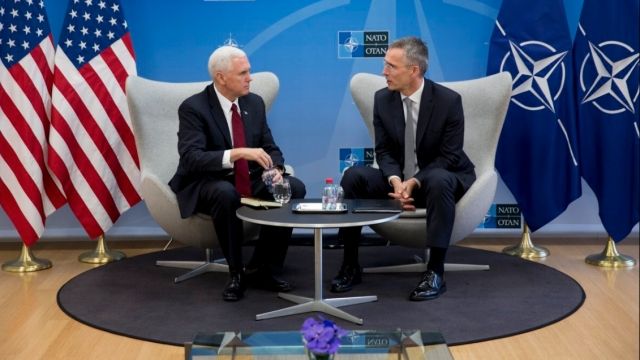 SMS
Pence Reaffirms Commitment To NATO But Tells Members To Pay Up
By Lauren Stephenson
By Lauren Stephenson
February 20, 2017
During his appearance with NATO's secretary general, the vice president also commented on the former national security adviser's firing.
SHOW TRANSCRIPT

Vice President Mike Pence continued to reiterate the U.S.' commitment to its European allies with a stop at NATO headquarters in Brussels on Monday.

"I can say with confidence: America will do our part," Pence said.

"Whatever our differences, our two continents share the same heritage, the same values and above all, the same purpose: to promote peace and prosperity through freedom, democracy and the rule of law. And to those objectives we will remain committed," Pence said while speaking at a joint press conference with Tusk.

Pence's comments Monday likely brought some relief to EU and NATO members who may have been concerned with past comments President Trump made on the campaign trail.

"The countries we are defending must pay for the cost of this defense — and if not, the U.S. must be prepared to let these countries defend themselves," Trump said in April 2016. 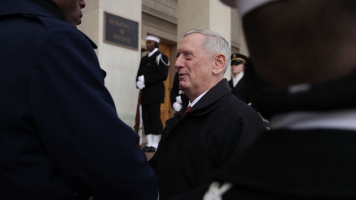 But Pence appeared to follow through on something Trump said during his campaign.

"They're delinquent, so we're going to say, 'You gotta pay.' So we're defending them. They're not paying, or they're paying a fraction of what they're supposed to be paying. Do you know the kind of money we're talking about?" Trump asked a crowd during an event in New Jersey in June 2016.

"While we commend the few nations that are on track and have met the obligation, the truth is that many others, including some of our largest allies, still lack a clear and credible path to meet this minimum goal. ... The president expects real progress by the end of 2017," Pence said.

Pence did try to reassure NATO on Russian aggression.

"Be assured, the United States, as well, will continue to hold Russia accountable, even as we search for new common ground, which President Trump firmly believes can be found," Pence said.

He called for Russia and Ukraine to abide by the cease-fire that went into effect Monday. 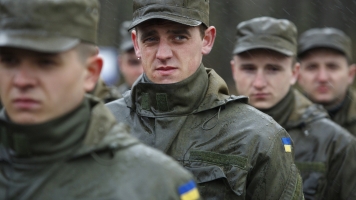 The Ukrainian Conflict Is Still Ongoing, And Getting Worse

When asked whom people around the world should believe — Pence or Trump — NATO's secretary general said the administration seems to be on the same page.

"I have heard exactly the same firm message from the president of the United States in two phone calls, from the Vice President in meetings today and in Munich, and from Secretary [James] Mattis, [Rex] Tillerson and [John] Kelly.  They all conveyed the same message that the United States is firmly committed to the transatlantic partnership and have an unwavering support for the NATO alliance," Stoltenberg said.

"I am very grateful for the close working relationship I have with the president of the United States. I would tell you that I was disappointed to learn that the facts that had been conveyed to me by Gen. Flynn were inaccurate," Pence said.