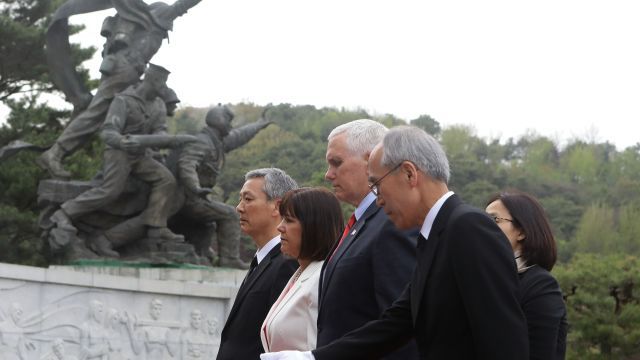 Vice President Mike Pence started his 10-day tour throughout the Asia-Pacific region in South Korea, and the main topic of conversation was the nation's neighbor to the north.

While visiting the demilitarized zone, he reiterated the United States' dedication to a denuclearized Korean peninsula. He said that process would start with negotiations, "but all options are on the table."

He went on to say, "President Trump has made it clear that the patience of the United States and our allies in this region has run out, and we want to see change."

According to CNN, Pence plans to discuss North Korea at every stop on his tour, and he could even touch on possible military options.

Trump has not publicly commented on North Korea's latest failed test, but he did say in a tweet that China was working with the United States on the "North Korean problem."

During his visit, Pence will also stop in Tokyo, Jakarta, Sydney and Hawaii. White House officials say the trip is meant to lay out a framework for future foreign policy relationships.