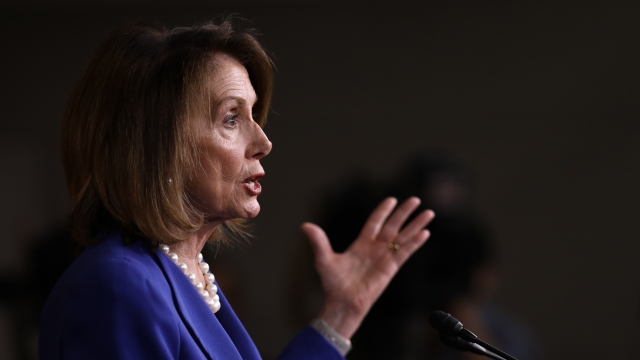 SMS
Pelosi Signals House May Delay Vote On New NAFTA Deal
By Alec Larson
By Alec Larson
April 2, 2019
Speaker Nancy Pelosi brought up concerns about the "big issue" of "how workers are treated in Mexico" as a potential roadblock for the deal.
SHOW TRANSCRIPT

According to Speaker Nancy Pelosi, the House may not vote on a new NAFTA proposal until Mexico moves forward on legislation that would protect workers' rights.

In an interview with Politico, Pelosi brought up concerns about the "big issue" of "how workers are treated in Mexico." She said that unless the country "demonstrate[s] some commitments in sincerity" regarding potential legislative changes, the House "can't even consider" a trade deal.

Despite a recent push by the Trump administration to move forward with the new NAFTA deal quickly, it looks like Congress isn't ready for a vote. Not only is the issue of Mexico's labor legislation likely to pause the deal, but House Democrats have also recently voiced interest in tweaking some aspects, citing concerns about the enforcement of its environmental standards and labor.

According to Politico, Mexico has indicated that it intends to pass labor legislation before its Congress goes on recess at the end of April.

House Democrats have been pushing Mexico for reforms that would guarantee Mexican workers the right to organize.