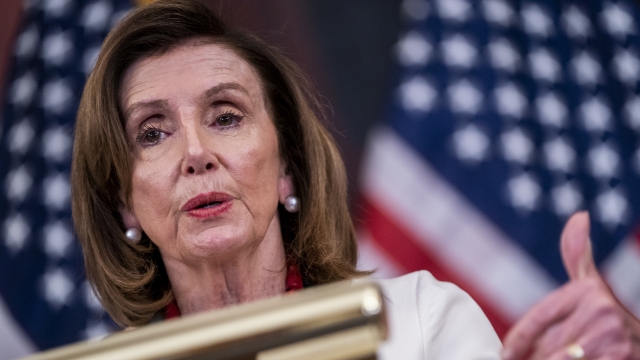 SMS
Pelosi: More Needs To Be Done After President Biden's First Year
By Associated Press
By Associated Press
January 20, 2022
He ends his first year in the White House with a clear majority of Americans for the first time disapproving of his handling of the presidency.

House Speaker Nancy Pelosi celebrated President Joe Biden's first year in office saying, "we have made great progress in this year," but added that "much more needs to be done" as most Americans give the president a low approval rating.

President Biden ends his first year in the White House with a clear majority of Americans for the first time disapproving of his handling of the presidency in the face of an unrelenting pandemic and roaring inflation, according to a new poll from The Associated Press-NORC Center for Public Affairs Research.

More Americans disapprove than approve of how President Biden is handling his job as president, 56% to 43%. As of now, just 28% of Americans say they want President Biden to run for reelection in 2024, including only 48% of Democrats.

Asked on Wednesday at a wide-ranging news conference about his flagging popularity, President Biden responded, "I don't believe the polls."

But Pelosi pointed out in a press conference Thursday, that an increase in jobs should be highlighted as a major accomplishment as the administration begins a new year.

Pelosi told reporters it was a disappointment that voting legislation that Democrats and civil rights leaders say is vital to protecting democracy collapsed late Wednesday when two senators refused to join their own party in changing Senate rules to overcome a Republican filibuster after a raw, emotional debate.

"There's no question last night was a disappointment," she said.  "We will continue the work."

The outcome was a stinging defeat for President Biden and his party, coming at the tumultuous close to his first year in office.

Meanwhile Pelosi indicted Thursday that she is "okay" with proposals to ban stock trading by members of Congress, a move backwards from a position she took last month.

"I've said to the of the House Administration Committee review all the bills that are coming in and see which ones -- where the support is in our caucus," Pelosi said.

Adding, "If members want to do that, I'm okay with that."

In December, Pelosi said lawmakers should not be barred from trading stock, a practice that has come under scrutiny because it gives members of Congress the opportunity to profit off insider information gained through their official duties.

The issue of congressional stock trading has taken on new urgency since the beginning of the pandemic, when suspiciously timed stock trades by lawmakers in both parties provoked outrage and led to multiple investigations.

To date, no one has been charged in connection with stock trading investigations undertaken by the Justice Department and the Securities Exchange Commission.

But the often-lucrative trades nonetheless shine a spotlight on the inadequacies of a 2012 law called the Stock Act, which bars members from using inside information to make investment decisions and requires that all stock trades be reported to Congress within 45 days.

Pelosi also responded to questions on the future of President Biden's "Build Back Better Act," a package of social initiatives and climate change strategies she hopes to send to the president's desk this year. She says, "I'm optimistic."