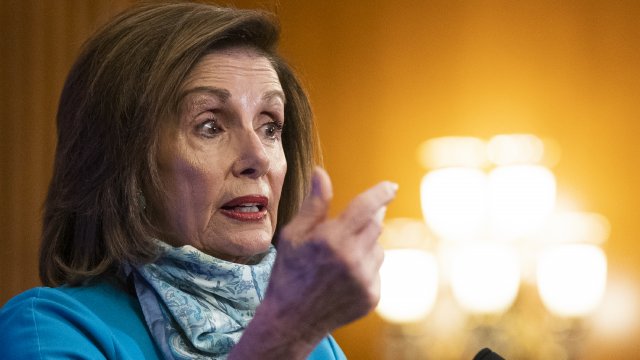 House Speaker Nancy Pelosi gave reporters a glimpse of what could be in the next coronavirus response bill Thursday.

Pelosi said some of the priorities for this next round include additional aid to state and local governments, more money for coronavirus testing, and help for the U.S. Postal Service, which the president has urged to raise its prices. More specifically, she said it will support nutrition assistance:

"In addition to putting money in people's pockets — direct payments, unemployment insurance, some other tax credits, etc. — we really also need to put food on the table," Pelosi said. "We had SNAP in the first bill, in the last three bills they wouldn't accept SNAP. We have to have SNAP."

Pelosi didn't say how much this next bill will cost but pointed out Federal Reserve Chairman Jerome Powell told her to "think big" since interest rates are currently very low. She said the national debt, which surpassed $25 trillion this week, won't be a primary factor in what gets funding and what doesn't. They're hoping to have the bill ready as soon as next week.

Senate Republicans, including Majority Leader Mitch McConnell, have raised concerns about the national debt, saying Congress should take a break and assess the situation before passing another bill.

In just a few months, Congress has passed more than $3 trillion in coronavirus aid.