How Pay Disparities In Women's Sports Pushes Them To Go International 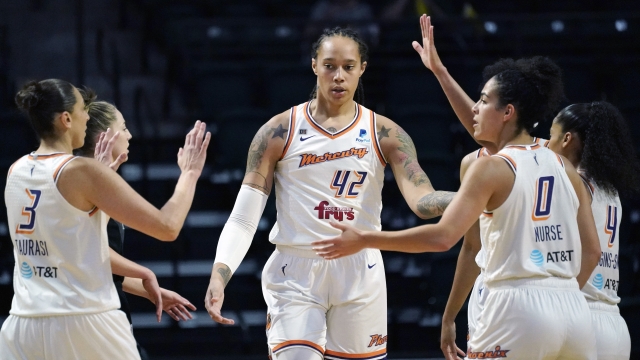 Brittney Griner said she's exhausted from having to go overseas to play basketball.

The 2022 NBA finals are underway, with the Boston Celtics battling the Golden State Warriors for this year’s title.

Leading the Warriors is Steph Curry — the highest paid player in the game at nearly $54 million a year, according to a U.S.A. Today report.

On average, NBA players are some of the highest paid athletes in the world, with the average salary for this season coming in around $7.3 million. But for their professional female counterpart, the WNBA, it’s a different story.

The top players in the league are reportedly making just shy of $230,000 a year. According to Spotrac, Brittney Griner is not far behind, with a salary of $227,900.

That pay disparity between the two leagues has come into sharp focus in recent months, following Griner's detainment in Russia in February. The WNBA star was stopped by authorities after arriving at a Moscow airport when officials reportedly found vape cartridges containing oil derived from cannabis in her luggage — an offense in Russia that carries a maximum penalty of 10 years in prison.

At the time, Griner was competing in a Russian league and reportedly earning about $1 million for doing so.

In a recent interview with ESPN, Griner's wife, Cherelle, says Brittney had told her prior to the start of the season in Russia, that she was "exhausted from always having to go overseas." Chirelle says the couple had hoped to make this Brittney's last season in Russia.

"In a league as competitive as the W, you actually aren't ever secure," Dr. Courtney Cox, assistant professor at the University of Oregon said. "Even if you do make a roster, there are other ways that folks need to supplement their income."

Dr. Cox is an assistant professor in indigenous, race, and ethnic studies and is currently working on a book about women's professional basketball and where it leads players throughout the world.

"I realized I couldn't tell the story of women's hoops by staying stateside; I had to move where athletes were moving, how they were thinking about themselves and their careers," Dr. Cox said.

Dr. Cox has traveled with players as they compete in leagues in Italy, Israel and even Russia, which she says is a year-round job for many players.

"They're balancing their life across borders," Dr. Cox said. "A lot of folks have their own stories that may not involve a government entity or an airport, but other spaces of feeling unsafe or going and playing somewhere and there is political strife."

This June, Title IX will have been law in the U.S. for 50 years. It recognized gender equity in education as a civil right and changed women's sports forever.

As the anniversary nears, Dr. Cox says the sports world has a chance to reflect and reimagine what our professional leagues can look like when it comes to pay.

"We have this incredible range of talent that is the in many ways that benefactor of Title IX, and yet there aren't places and adequate pay for them once they graduate, right or once they win a championship, right?" Dr. Cox said. "I think this is a moment for us, as fans as advocates of the game, as folks working within sports business, to really think about what it would take to have this opportunity to not have to go play internationally."