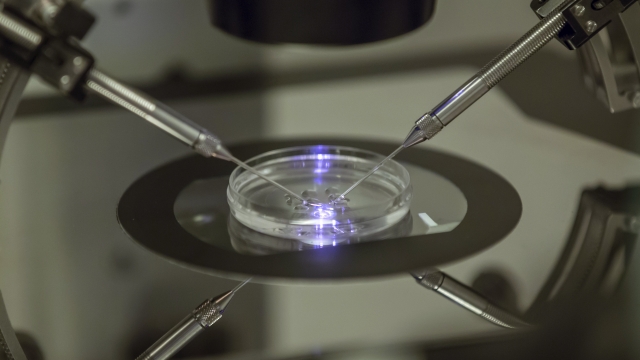 Samira Valdez always knew she wanted to be a mom, but she never imagined her path to motherhood would look how it did.

"It’s just a lot more stress added to what is already very stressful from the start," Valdez said.

Valdez is one of many women who underwent in vitro fertilization, known as IVF, in order to have children, but Roe v. Wade being overturned has changed a lot for her family.

"I’m feeling a lot more pressure to make decisions that I wasn’t ready to make," Valdez said. "My husband and I are considering doing it very shortly, in the next couple weeks doing a consultation with our doctor.”

Valdez and her husband have two embryos left in storage from their first round of IVF. They planned on trying to get pregnant again once their daughter was a little older. In the meantime, their fertility clinic has been keeping those embryos in storage.

That standard now hangs in the balance, as abortion restrictions take place across the country. Some patients worry that could pave the way for laws that give embryos legal protection, and that might mean routine procedure — from discarding nonviable embryos to unsuccessful implantation — could be criminalized. It could also prevent doctors from creating as many embryos as possible to increase the chances of pregnancy.

"Our biggest concerns are the ignorance of our lawmakers, and they need to have a partnership with scientific physicians on defining where does life begin," Dr. Samuel E. Brown said.

Dr. Brown runs one of the biggest fertility clinics in Florida. He says he’s been busy taking calls from concerned patients, wondering if their fertility treatments could be altered. He warns that regulation limiting the number of embryos would lengthen the IVF process and make it more costly.

"Any roadblocks or increase in cost for fertility treatment can potentially scare away the insurance payers, where they don’t want to take the burden of that extra cost," Dr. Brown said.

As of now, no changes have been made to IVF in Florida or elsewhere, and most clinics are saying they’re operating as normal.

The governor’s office told Newsy, “This pro-life law doesn’t mention IVF at all,” but concerned patients point to Ohio — another Republican-run state — where lawmakers proposed a bill that would give rights to "unborn human individuals from the moment of conception" as an example of potential legislation that could affect IVF.

"I'm willing to say 99.9999% that any legislation that's ever passed that specifically deals with this is going to exempt any type of liability from, you know, from these IVF procedures that were done in the past," Gualberto Garcia Jones, general counsel with The Personhood Alliance, said.

Still, the lack of clarity leaves some experts worried.

"I guess what I fear, in part, is that a zealous prosecutor or zealous resident of Texas or Oklahoma or Idaho who has now a right to sue as an individual for somebody who provides an abortion or aids and abets an abortion will take that definition of person and run with it," Lisa Ikemodo, professor at UC Davis School of Law, said.

Until lawmakers sort out the details, patients like Valdez remain active in the IVF community, offering support to others after enduring a difficult journey before finally having her daughter, Sienna.

"Unfortunately at 13 weeks, I had a missed miscarriage, most likely due to an abnormal embryo that was transferred," Valdez said. "I'll never forget that pain."

IVF clinics, like Brown Fertility, are eager to work with lawmakers to ensure IVF — which wasn’t around before Roe — remains available to those struggling with infertility.