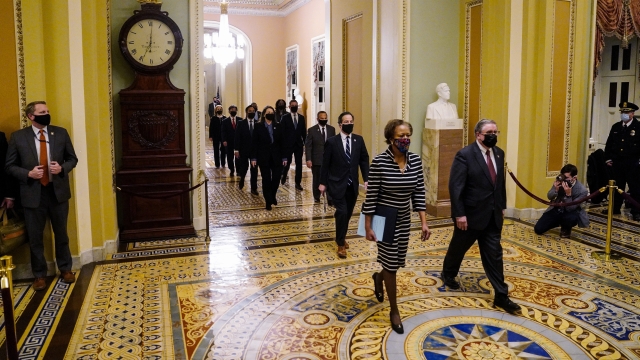 SMS
Former Impeachment Managers Reflect On The Process
By Nathaniel Reed
By Nathaniel Reed
February 8, 2021
An exclusive group of lawmakers from the House of Representatives are tasked with arguing for President Trump’s conviction.
SHOW TRANSCRIPT

When the second impeachment trial into former President Trump kicks off, an exclusive group of lawmakers from the House of Representatives will be tasked with arguing for President Trump’s conviction.

The former president faces one charge: incitement of insurrection.

“The days are long. You go sometimes until midnight or beyond, and then you get up very early the next morning and do it again,” reflected Rep. Jason Crow.

Last year, Crow was one of the seven House impeachment managers — representatives working as prosecutors to argue the case for President Trump’s conviction to the jury: all 100 members of the U.S. Senate.

Back in 1999, McCollum was one of 13 impeachment managers in the trial of former President Bill Clinton.

“The responsibility is on your shoulders to present the case to the House and the managers for impeachment,” he told Newsy.

In each trial, managers faced some of the same roadblocks. Both were unable to present live witnesses — an outcome looking increasingly likely in the upcoming trial after Trump's lawyers announced he will not be testifying.

“I think at that point — when we realized we couldn't present live witnesses and we just weren't able to make the kind of compelling case we thought we would to the public and to the Senate, I think we pretty well concluded that we weren't going to win the ... conviction,” McCollum said.

With the majority of Republican senators voting in late January to declare the trial into a former president unconstitutional, Trump’s second trial looks all but dead on arrival.

Even with a conviction unlikely, the impeachment trial over the Jan. 6 riots at the Capitol is certain to provoke strong feelings.

“What’s exceptional about this case is that you’re actually trying a case involving crimes,” Crow said. "You’re trying it in front of jurors — in this case, the senators who are victims of the crime. And the prosecutors — the House managers — were also victims of the crime in the trial that is being held in the courtroom of the Senate chamber. That’s actually the scene of the crime. I can’t think of any instance in American history where, you know, that’s the case.”