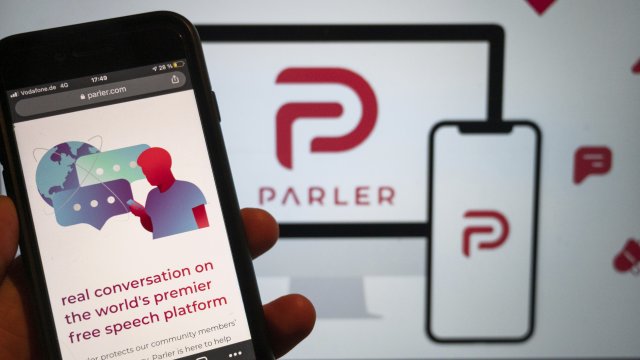 SMS
Big Tech Moderation Crackdown Gives Parler, Gab A Surge of Users
By Tyler Adkisson
By Tyler Adkisson
January 11, 2021
The surge in user growth for platforms like Parler has slowed down in recent days, as Amazon Web Services suspended services to the website.
SHOW TRANSCRIPT

Small social media networks like Parler and Gab favored by some conservatives are seeing their user base balloon in the wake of Facebook and Twitter banning President Donald Trump and some of his followers.

The main draw of networks like Parler and Gab is their hands-off approach to content moderation. Users on the platforms are generally tasked with blocking offensive content when they see fit.

The biggest names on the platform are mainstays in the conservative political world, like right-wing commentator Dan Bongino and Rep. Devin Nunes.

"Most of the narratives are election-related. I mean, that's the pressing issue that's drawing people into these spaces with such intensity and involvement," said Katie Joseff, senior research associate at the Center for Media Engagement at the University of Texas.

"After the election, as you saw more mainstream conservatives who were concerned about perceived biases of the platforms in terms of their moderation migrate to Parler, thinking that this was really just a free speech space where conservative viewpoints wouldn't be moderated," said Bret Schafer, Disinformation Fellow at the Alliance for Securing Democracy. "But of course, most of the content there was far more extreme and problematic than that."

"The people who are just conservative, you know, maybe got a little radicalized around QAnon are often then following these movements into these other platforms. And, you know, white nationalists are on those platforms. National Socialists are on those platforms. And they are working as hard as they can to spread their message. It's against the government and they want a civil war," said Sophie Bjork-James, Assistant Professor of the Practice in Anthropology at Vanderbilt University.

Amazon Web Services suspended Parler from its web-hosting services because its lack of content moderation allowed calls for violence to surface and proliferate on its platform. Parler responded by suing Amazon, alleging antitrust violations.

One question that remains is whether these platforms will continue to find sustained growth that came in the wake of the election, especially as more hosting services remove these fringe platforms. Apple and Google both removed Parler from their app stores.

Some critics say these deplatforming efforts may not do enough to stamp out harmful mis-and-disinformation that can lead to real world violence. Some Parler users have already started looking for their next platform given the technical setbacks.

"I would say there's been an invigoration of activity on Telegram, especially as there's new Telegram channels that are taking in the refugees from Parler," said Joseff. "Never before has the incentive been so great for certain populations to suddenly be coordinating, especially when they feel this is the 11th hour and it's their duty to help President Trump fight against election fraud."