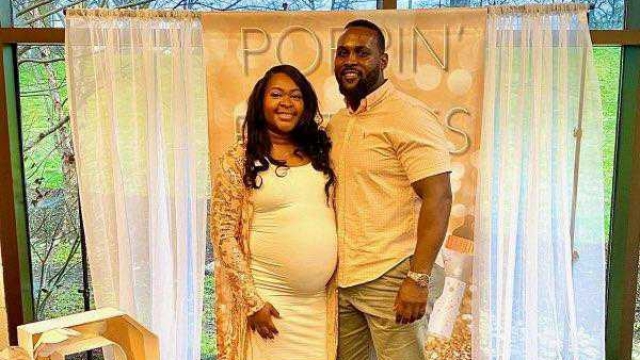 SMS
COVID-19 Linked To Increased Hospitalization Of Pregnant Minorities
By Amber Strong
By Amber Strong
September 18, 2020
There's a health disparity in America, and the Centers for Disease Control and Prevention say COVID-19 may be making it worse for pregnant women.
SHOW TRANSCRIPT

There's a health disparity in America, and experts from the Centers for Disease Control and Prevention say COVID-19 may be making it worse for pregnant women.

Brea Markey-Johnson says she knew something wasn't right when she arrived at the hospital for delivery.

"I kept having a fever, like a low-grade fever. And they were like, this kind of comes with pregnancy and labor sometimes. So it could just be it, and I'm like, but do I need to be tested," said Markey-Johnson.

After giving birth, she was discharged despite chills and a fever she says wouldn't go away.

"When I would pull, like I was sucking, I was having difficulty breathing," said Markey-Johnson.

Four days later she was back in the hospital. The diagnosis: COVID-19.

New data from the CDC shows "pregnant women who are Hispanic or Black might have disproportionately higher rates of COVID-19–associated hospitalization."

The number of Black and Hispanic pregnant women hospitalized outpaces the same groups of women who aren't pregnant. The CDC also says "identifying COVID-19 during birth hospitalizations is important to guide preventive measures."

"What if something would have happened to my baby because I'm constantly telling you something's not right," she says.

"We found that in hearing about the stories of women who died due to pregnancy-related complications, that an overarching theme was that women really weren't being heard," Dr. Wanda Barfield, Director of the CDC Division of Reproductive Health, told Newsy.

"Help other women speak up and be heard," one woman urged during the CDC public service announcement.

The ads aren't in response to the pandemic but an overall warning for a nation that experienced 658 pregnancy-related deaths in 2018; with Black women accounting for twice the number of deaths as Whites.

"I still remember to this day what that voicemail said, and he said, 'April, this is Dr. So-and-So. And I'm calling to let you know I received your latest results. And unfortunately, this is not a viable pregnancy,'" April Wafford recalled.

April Wafford says she disagreed, told the doctor as much and got a second opinion.

"Had I not been my own advocate and had I just taken what he said as truth, my son would not be here, and every day I think about it," said Wafford.

Dr. Joia Crear-Perry, who has testified before Congress and the UN on Black maternal death, tells Newsy it's rare for minority women to speak up, and when they do sometimes they aren't heard, a problem that's been woven into gynecological history.

Investigators are still researching the COVID-19 pregnancy disparities and say it could be everything from the jobs some minorities work to bias. Crear-Perry says all of those are symptoms of an issue centuries in the making.