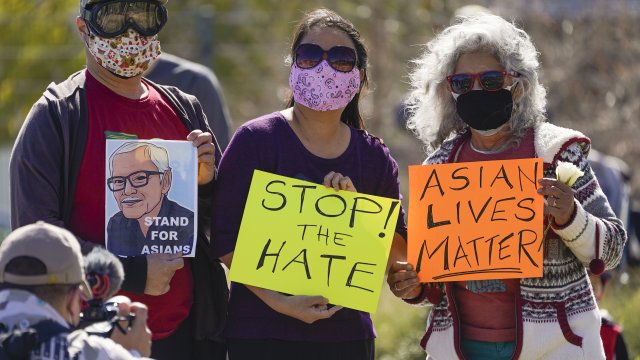 Scenes likes this. are reigniting a conversation among Asian Americans that includes one big question: How does the rest of the country perceive us?

"There's a perpetual foreigner stereotype, this outsider racialization that we're getting blamed for a lot of the COVID-19 and we're getting treated as foreigners who don't belong," Russell Jeung said.

Russell Jeung is with the advocacy group Stop AAPI Hate.

He says discrimination against Asian Americans has been happening for generations. But recent videos of more overt and violent encounters...make it hard to look away.

"A lot of times people sort of do this 'Oppression Olympics,'right? And Asian Americans before used to compare ourselves to Blacks and say, well, we don't have any right to complain because compared to how African Americans are treated. We we shouldn't speak up."

"I wasn't sure if they were going to take me seriously."

She initially didn't even want to file a police report about her experience on the New York City subway, but ultimately decided to share her story...

"Some guy got on the train at one of the stations in the Bronx without a mask on," she recalled. "So I moved away from him to the other side of the train car, and then he followed me. And then he starts yelling all these racial slurs about, 'Go back to China,' and 'Chinese people causing this virus.' And he spits all over my hair, my arm, my back. Everywhere. The most heartbreaking thing that happened during the incident was the fact that nobody stood up or said anything when it happened to me. Everyone just kind of stared at their phones and walked away like nothing was happening."

Experiences like Tang's are part of a long series of pandemic-related hate incidents. Tang says some of these encounters point out a flawed perception of Asian Americans. That includes a long-standing trope, according to Ian Shin from the University of Michigan.

"You think about the kind of 'model minority' myth and the idea that Asian Americans are doing better in the United States or more upwardly mobile or better educated and therefore makes them a more kind of lucrative -- a target for an attack," he explained. "It may not be racially motivated on its face, but I think the kind of implicit bias around the way that Asian Americans are thought of as model minorities do influence some of these attacks. "

And there's research showing that myth has been internalized by a number of Asian Americans. Now, some are taking more deliberate steps to counteract that myth.

"Growing up, I think you probably told, oh, you should just ignore what other people say and I don't pay attention to them," Tang said. "That's the attitude that I was when I was growing up with, you know, that you're supposed to ignore things. But now I feel people, more people are speaking up about it."

Empowerment is only one step in all this, according to Russell Jeung. It needs to yield results, which, in his view, includes ethnic studies, civil rights protection and restorative justice for all.

"What we need to do is reimagine America, where we don't have insiders and outsiders, where it's not just a White Christian nation, but it is inclusive of everybody."