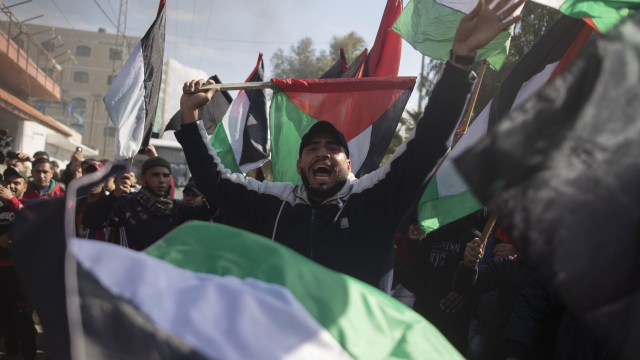 The White House's two-state proposal was lauded by Israel but rejected by Palestinian leaders.

On Tuesday, the White House unveiled its proposed peace agreement between Israelis and Palestinians. Flanked by Israeli Prime Minister Benjamin Netanyahu, President Trump said the so-called "deal of the century" represented a "giant step towards peace."

President Trump said: "Complex problems require nuanced, fact-based remedies. That is why our proposal provides precise technical solutions to make Israelis, Palestinians, and the region safer and much more prosperous. My vision presents a 'win-win' opportunity for both sides."

The deal reportedly took at least two years to develop under the supervision of Jared Kushner, President Trump's senior adviser and son-in-law. It calls for a two-state solution, but would require the Palestinians to concede on a number of the issues that have driven the decadeslong conflict.

Tuesday's announcement also came hours after Netanyahu was indicted on corruption charges. But it was nonetheless welcomed by both the prime minister and his political rival, Benny Gantz.

The White House said opposition to the plan is "simply a declaration of support for the hopeless status quo."

However, the proposal was reportedly negotiated without any input from the Palestinians. Palestinian leaders rejected the plan before its release, arguing that it favored Israel. They also said they had not been invited to the White House.

In the occupied Palestinian territories, thousands rallied against the proposal, holding signs that read "Palestine is not for sale."