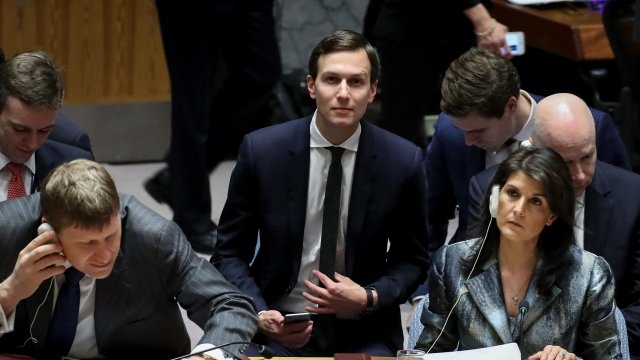 The Palestinian Authority president says the U.S. can't go it alone anymore with the peace process between his people and the Israelis.

Mahmoud Abbas told the United Nations Security Council the U.S. has a pro-Israel bias and should stop leading peace negotiations. Instead, Abbas wants a new multination conference to jump-start the long-stalled peace talks and recognize a Palestinian state.

White House senior adviser Jared Kushner joined U.S. Ambassador to the U.N. Nikki Haley to hear Abbas' speech. Kushner has been leading the White House's efforts to create a new Middle East peace plan for months, but there's no firm timetable for its release just yet.

But Palestinians are skeptical of President Donald Trump's commitment to the peace process. He decided to move the U.S. Embassy in Israel into the contested city of Jerusalem and slash funding for a Palestinian refugee agency.

And Kushner himself has been scrutinized for the extensive financial ties between his family's businesses and Israel. Critics argue those connections affect Kushner's ability to be impartial in negotiations.

After Abbas spoke, he left and missed the rest of the speeches, something the Israeli and U.S. ambassadors to the U.N. didn't like.

Even though Abbas wasn't there, Haley still addressed him during her speech, saying: "Our negotiators are sitting right behind me, ready to talk. But we will not chase after you."