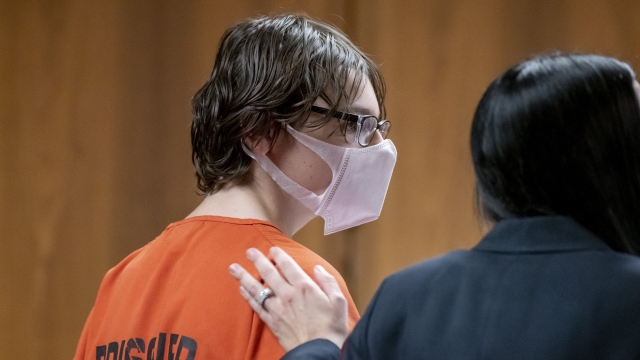 A 15-year-old boy charged with fatally shooting four fellow students at his Michigan high school also wrote of raping and killing a girl at the school, prosecutors said Tuesday during a hearing to decide if he remains in an adult jail.

Text messages to a friend and items from a journal were offered by prosecutors as reasons to keep the teen in a cell at the Oakland County Jail in the Detroit suburb of Pontiac instead of having him transferred to a juvenile facility.

"He expressed delight in torturing a family of baby birds and he wrote about the joy he received in listening to them squeal as he killed them," she continued. "He spoke of his admiration for Adolf Hitler and Jeffrey Dahmer, specifically stating 'when you die, you need to be remembered for a long time, doing something that would make people think of you until time ends.'"

Dahmer was sentenced to 16 consecutive life terms for killing 17 men and boys, most in Milwaukee. He was killed in prison in 1994.

The Michigan teenager is charged as an adult with first-degree murder, assault with intent to murder, terrorism and gun charges in the Nov. 30 shooting at Oxford High School, about 30 miles north of Detroit.

In addition to the four students slain, six other students and a teacher were wounded.

Last month, the suspect's attorneys filed a notice of an insanity defense.

He has been held at the county jail since December. Currently, he is lodged alone in a cell in the jail's clinic to keep him from seeing and hearing adult inmates. Defense attorneys have been urging for him to be moved to Children's Village.

"To place this defendant with other at-risk juveniles who are presumably the same age as his victims would be contrary to the rehabilitation of those at Children's Village and pose a potential risk of harm to their safety," Washington said.

But defense attorney Paulette Loftin said the suspect's texts also showed he was asking for help.

"He detailed seeing things, seeing people, hearing voices and then they disappear," Loftin said Tuesday. "He discusses telling his parents again that he needs therapy, that he needs treatment, that he needs to talk to someone. This is someone who was having, in my opinion, a mental health crisis and no one did a thing."

"He is completely isolated" at the jail, Loftin said. "And for someone who has mental health issues, isolation is horrific."

Another assistant prosecutor, Kelly Collins, said the teen "wants to be remembered" and while in jail asked how he would get fan mail and hate mail.

"He wants that notoriety," Collins said.

Judge Kwame Rowe said Tuesday that he could have a written ruling by early next week on whether the teenager will remain in the jail or be transferred to Children's Village.

Earlier in Tuesday's hearing, Children's Village manager Heather Calcaterra testified that she would have concerns if he were incarcerated at her facility.

"This was a devastating situation and we don't know that the defendant's presence on our campus, in the classrooms, on the unit, how that may trigger or impact other young people," Calcaterra said. "I would also be concerned about his safety. I do not know if he will be a target."

"We've never had a situation like this... including a school shooting or a defendant who was going to use the insanity plea," she added. "So, we don't know what we're going to need." 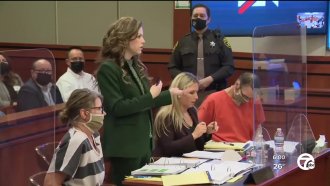 The suspect's parents, Jennifer and James Crumbley, are charged with involuntary manslaughter in the shooting. Their preliminary examinations — to determine whether they will stand trial in circuit court on the charges — are scheduled to resume Thursday.

Prosecutors allege they gave their son the gun used in the shooting as an early Christmas present. They also are accused of breaching their responsibility by refusing to remove him from school two hours before the shooting when counselors confronted them with his distressing drawings of violence.