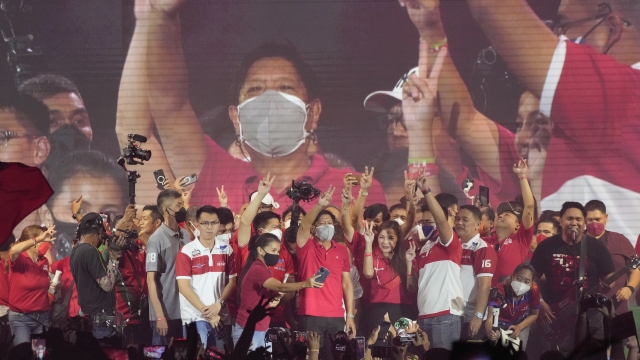 SMS
Philippine Election Could Put Dictator's Son In Power
By Ben Schamisso
By Ben Schamisso
May 6, 2022
Ferdinand "Bongbong" Marcos Jr. is the clear favorite to win the Philippine presidency 35 years after his father was overthrown.

They thought the past was behind them, but in the Philippines, history could come full circle as soon as Monday.

Thirty-five years ago, over one million Filipinos took to the streets to overthrow dictator Ferdinand Marcos.

Today, his son Ferdinand "Bongbong" Marcos Jr. is on the verge of bringing the family back to power.

According to polls, he's the clear favorite to clinch the presidency.

"I mean, we could just kiss all these rights goodbye," said Lila Ramos-Shahani, former secretary-general of the Philippine National Commission to UNESCO.

In power from 1965 to 1986, the late Marcos oversaw the torture and killing of thousands of opponents.

He and his flamboyant wife, Imelda, are estimated to have stolen $10 billion from their country, but their son has long defended the family's actions.

"He says his father didn't do any human rights violations," Ramos-Shahani said.

Ramos-Shahani is a Marcos cousin who is alarmed by their possible return to power.

"I have friends who were raped, who were tortured, who were subjected to different kinds of mutilation," Ramos-Shahani said.

She has served under three recent Philippine administrations and says her country has been too quick to forgive and forget.

"Filipinos are a very forgiving culture, you know, it's almost like virtue signaling," Ramos-Shahani said. "But the problem is that there's no accountability."

After the 1986 revolution, the Marcos family fled to Hawaii with millions of dollars in cash and jewelry, though they left behind Imelda's collection of 3,000 shoes.

The patriarch died in Hawaii in 1989, but Imelda and her children were allowed to return home two years later.

"Even after 1986, when Imelda Marcos would go to a market in the Philippines, people would be like, 'Oh my god, she's here. What shoes is she wearing?'" Ramos-Shahani said.

Over the years, the Philippine government has recovered some of the family's stolen wealth, but not all.

Today, analysts say the Marcos Jr. campaign is using that money to rewrite his father's legacy on social media.

"Projecting him as the greatest president that ever ruled, martial law as a kind of golden age," said Vicente Rafael, author of "The Sovereign Trickster: Death and Laughter in the Age of Duterte."  "All this having been helped, of course, by the enormous amount of wealth that they plundered from the Philippines."

Also helping Marcos Jr. — the fact that his father's era is mostly missing from textbooks.

"Large gaps in education have contributed to this kind of rehabilitation of the Marcos family," said Luis Francia, columnist and adjunct professor at New York University.

In another twist alarming observers, Marcos Jr. is running with Sara Duterte as his vice president.

She is the daughter of current president and strongman Rodrigo Duterte. The Duterte' administration is accused of orchestrating the killing of tens of thousands of people suspected of being drug dealers.

"Sara Duterte has expressed in many ways the desire to continue her father's drug war, and to me, it's just unacceptable," Rafael said. "I mean, this is essentially a kind of genocide conducted, especially on the poor."

The only presidential candidate polling high enough to pose a potential challenge to Marcos Jr. is Leni Robredo, the only woman in the field.

Her anti-corruption platform and pink-colored rallies have attracted growing crowds of supporters and volunteers. She beat Marcos Jr. six years ago in the vice-presidential race.

Today, with considerably less money, she is the last obstacle standing in the way of the Marcos family's return to power.