Where Voting Stands Four Days Out From Election Day 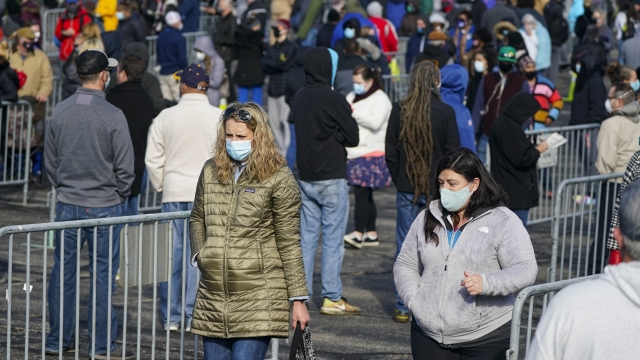 SMS
Where Voting Stands Four Days Out From Election Day
By Shira Tarlo
By Shira Tarlo
October 30, 2020
In the final weekend before election day, early voting — both by mail and in-person — has reached historic levels.
SHOW TRANSCRIPT

In the final weekend before Election Day, early voting — both by mail and in-person — has reached historic levels. Already, more than 82 million people have voted — nearly 60% of the total votes counted in the entire 2016 election — with Hawaii and Texas eclipsing their totals four years ago.

The numbers suggest voters are energized by an election that both sides have called the "most important" of their lifetime, and a pandemic that has killed over 228,000 Americans.

"Tuesday, your vote is going to save our country," President Trump told supporters Thursday in Tampa.

Experts say Washington is a good indicator of voter enthusiasm this year. The state ran all-mail elections in 2016 and 2020 under the same rules. But this year, its mail ballot return rates are nearly four times what they were in 2016.

The record turnout hints that despite initial concerns the pandemic would make it harder than usual to vote, efforts by states to modify their voting options have helped expand access to the ballot box.

Registered Democrats have nearly doubled registered Republicans in requests for mail-ballots but hold only a slight edge when it comes to ballot return rates. And they've warned against reading too much into what the numbers could mean for the final result.

"We know that Republicans often have a surge on Election Day, and we are just encouraging people and reminding people that their vote counts, literally," Atlanta's Democratic Mayor Keisha Lance Bottoms, a vocal Biden supporter, said in an interview.

"We're looking at potential intimidation that's not being addressed. Looking at excessive and unreasonable challenges to voters inside the polling place, which is something that we saw back in 2004, especially at colleges and universities. Looking at legal challenges or challenges designed just to delay and slow down the vote-by-mail ballot count, and then potentially, you know, what happens if things get dragged out too long," Witold Walczak, the legal director of ACLU of Pennsylvania, told reporters Wednesday.

The Biden campaign has for months been trying to combat President Trump's efforts to undermine the legitimacy of the election.

"This is going to be a fraud like you've never seen," the president said of mail-in ballots at the first presidential debate earlier this year.

"This is all about trying to dissuade people from voting because he's trying to scare people into thinking that it's not going to be legitimate," Biden said of the president's claims at the first presidential debate. "Show up and vote."

Legal challenges over whether late-arriving mail ballots will be counted are underway, with the Supreme Court extending the deadline to count mail ballots in Pennsylvania and North Carolina.