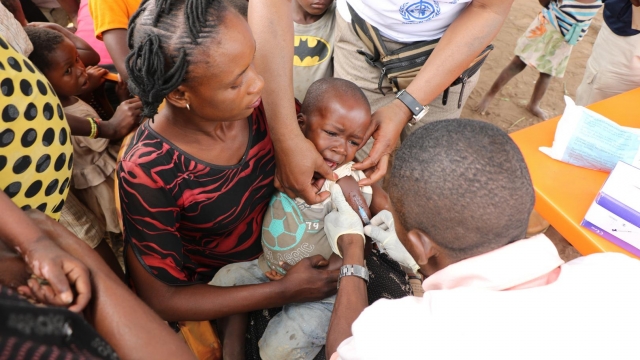 SMS
Over 800,000 Congolese Children To Receive Measles Vaccine
By LeeAnne Lowry
By LeeAnne Lowry
September 26, 2019
The country's government and the WHO plan to vaccinate nearly 825,000 children under 5-years-old.
SHOW TRANSCRIPT

A measles outbreak in Congo has killed over 3,500 people this year — significantly more than the country's Ebola outbreak. Nearly all those deaths were children. But now there's a plan to vaccinate hundreds of thousands of Congolese children against measles.

The World Health Organization announced the emergency campaign on Wednesday. It's the organization's third measles campaign in the country this year. Over the course of nine days, Congo's government and the WHO plan to vaccinate nearly 825,000 children under 5-years-old.

Congo has seen over 180,000 suspected cases this year in what the WHO calls the world's "largest and fastest-moving measles epidemic." Back in August, the organization said it's facing the highest number of reported measles cases internationally in over a decade.

According to provisional data from the WHO, the number of global reported cases nearly tripled in the past year — with more than 364,000 cases so far in 2019 compared to about 129,000 reported cases in the first seven months of 2018.