Over 40 People Arrested In Baton Rouge Protests Over Police Killings 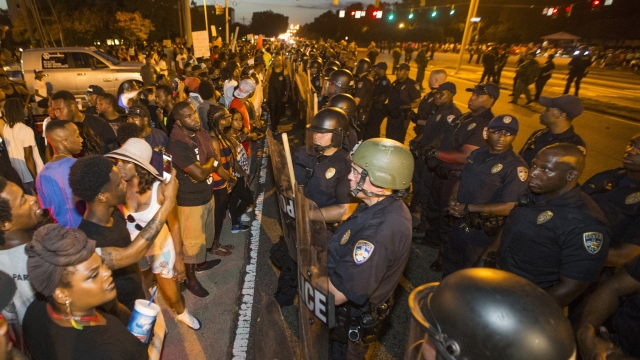 SMS
Over 40 People Arrested In Baton Rouge Protests Over Police Killings
By Ryan Biek
By Ryan Biek
July 11, 2016
At least 309 protesters were arrested in four major cities over the weekend.
SHOW TRANSCRIPT

Police arrested more than 40 people Sunday night in Baton Rouge, Louisiana, adding to the hundreds arrested across the country while protesting the police killings of black citizens.

Most of the Baton Rouge arrests stemmed from a group of 100 to 200 protesters who nearby residents said refused to move off private lawns or from the street back onto the sidewalk for two hours. Police believe the group intended to block a highway.

A police spokesman told WAFB this appeared to be a separate group from those who marched on the capitol without incident earlier in the day. He noted police actually escorted the protesters in the capitol march.

Over 100 protesters were arrested over the weekend in demonstrations outside the police headquarters in the city. The charges were for blocking a roadway, disobeying police and inciting a riot.

At one point Saturday night, an officer reportedly pointed an assault rifle at protesters and at a Huffington Post reporter. Baton Rouge's police chief said the officer's supervisor immediately took the weapon from her.

By Monday, at least 309 people had been taken into police custody in New York, Chicago, Baton Rouge, and St. Paul, Minnesota.

A statement by the mother of Philando Castile, the man who was fatally shot last week by police during a traffic stop, asked all protesters to remain peaceful. She said, "When demonstrations become violent, it disrespects my son and his memory."