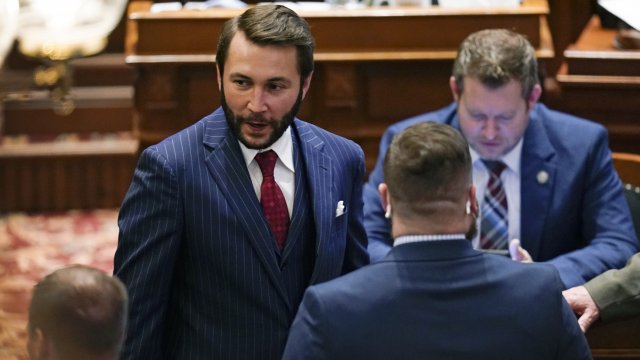 Lobbying records pull the curtain back on Opportunity Solutions Project, a nonprofit advocating for tougher election laws in about a dozen states, including 2020 battlegrounds, with legislatures led by Republicans.

Many of those lawmakers, like former president Donald Trump, still question the security of the last election despite no evidence of widespread voter fraud.

Opportunity Solutions Project reported lobbying in favor of a bill just passed in Iowa that would reduce early voting from 29 to 18 days and the time to request an absentee ballot, while requiring more aggressive maintenance of voter rolls.

"We see this as an opportunity," said Jonathan Bechtle, operations director at Opportunity Solutions Project.  "There clearly are some things that need to be cleaned up or worked on or could be better in some of these states."

Their aim is to restore confidence in elections, he said.

"Making it easy to vote, hard to cheat, is kind of how I think about it," Bechtle said.

Opportunity Solutions Project is tied to the Foundation for Government Accountability, an organization supporting conservative causes such as food stamp reform.

IRS records show that group received more than $9 million dollars in donations in 2018, the most recent year on file.

The organization does not reveal the identity of its contributors, even as they help fuel their national drive to change voting laws that could make it harder for people to cast ballots.

"We take it really seriously to protect the privacy of our donors just like any other nonprofit does," Bechtle said.

Texas Rep. Jacey Jetton said feedback from a variety of outside groups was helpful as he put together four bills to stiffen election rules.

"We’ve talked to a lot of organizations, we’re listening," said Jetton, a Republican. "But the bills we put together won’t be bills by any particular organization. These are going to be ones that we determine make sense."

The other side has its own army of powerful interest groups deployed to statehouses.

They argue the right to vote is under attack.

Lobbying reports show branches of AARP, the ACLU and NAACP all working to promote bills to preserve and expand voter access.