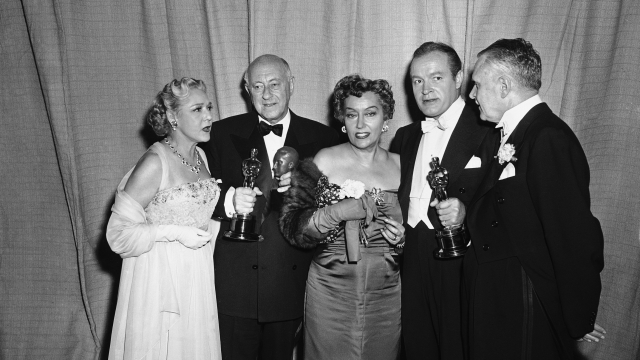 SMS
The Oscars' Pandemic Format Is A Throwback To Its Early TV Roots
By Katherine Biek
By Katherine Biek
April 23, 2021
When the Oscars were first televised in 1953, the show was carried live from both Hollywood and New York City.
SHOW TRANSCRIPT

After more than a year of the coronavirus pandemic -- it's safe to say many of us are a little sick of Zoom meetings.

And the Oscars are no exception. Instead of going virtual like other award shows this season, the 93rd Academy Awards is being held as an in-person event spread out across multiple locations. The decision stems from wanting to keep everyone in attendance safe. But it's also tied to the award show's history.

When the Oscars were first televised in 1953, the show was carried live from both Hollywood and New York City.

"But isn't it exciting to know that a lot of these glamorous stars are going to be in your homes tonight? All over America, housewives are turning to their husbands and saying, 'Put on your shirt, Joan Crawford is coming,'" host Bob Hope said in his opening monologue.

The Big Apple appealed to the show's broadcaster NBC for a couple reasons. Most of its TV and radio stations were located in the city, and it allowed stars with theatrical commitments on Broadway to still attend the show.

Those actors often arrived after the event had already started. Because of her late curtain call, Audrey Hepburn, for example, was seated at the New York ceremony for less than 10 minutes before winning Best Actress in 1954.

It soon became too expensive to put on a bi-coastal broadcast, and New York's co-hosting duties ended after 1957. From then on, the show has been held solely in Los Angeles.

But producers have utilized live remotes on a few memorable occasions. Like when the Atlantis space shuttle crew tuned in while in orbit to congratulate George Lucas on his win in 1992.

Or when First Lady Michelle Obama helped present the 2013 Best Picture award from the White House.

In order to avoid virtual acceptance speeches this year, the Academy has told guests to show up in person at various venues in Los Angeles and Europe. And the guest list has been drastically cut. The only people in attendance will be the nominees, their guests and the presenters.