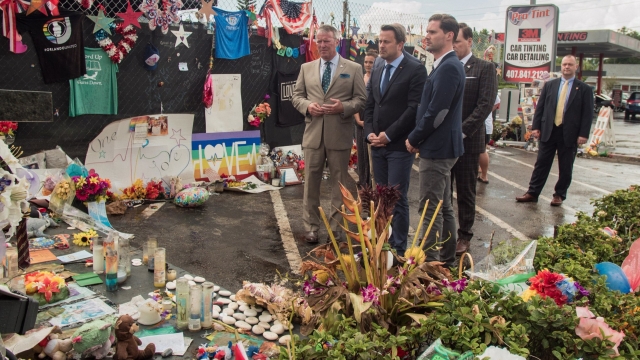 Mayor Buddy Dyer said he wants to keep the nightclub "exactly as it is."

The fate of Pulse nightclub in Orlando has been uncertain since the June 12 shooting that killed 49 people and wounded 53.

But the city's mayor says he wants to turn the club into a permanent memorial where people can continue to pay their respects to the victims.

"At some point, I think the city needs to gain control, purchase the Pulse site and then make some determination with a lot of input on what a permanent memorial might look like," Orlando Mayor Buddy Dyer told WMFE.

Mayor Buddy Dyer said in a radio interview Wednesday he would like the nightclub to stay "exactly as it is" for now so people who want to visit the site can see it as it currently exists.

Stacks of flowers, posters, crosses and other items still surround the building as a temporary tribute to the victims.

Now, there's been some confusion in recent days as to if and when Pulse will reopen as a memorial.

The onePULSE Foundation, a nonprofit established by the club's owners to provide victims with financial support, said in a Facebook post Sunday it was collecting donations for a "permanent memorial that will be built on the Pulse Orlando site."

But the foundation later clarified that, while the club's doors are still closed, the owners are hoping a memorial will be created at the site.

A Pulse spokesperson told the Orlando Sentinel the club's owner had recently met with city officials about the idea but talks are still "very preliminary."

This video includes clips from WFTS and WPTV and images from Twitter / @orlandomayor and Getty Images.