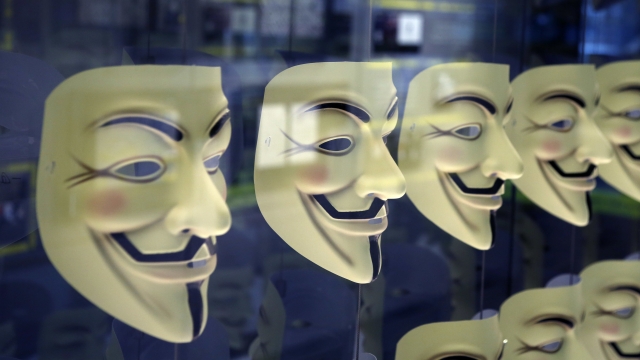 SMS
'Anonymous' Hacker Comes Forward And Vows To Take Down QAnon
By Sasha Ingber
By Sasha Ingber
November 27, 2020
"I'm here to stop this horrible nightmare that I see as a next generation version of what I started," says Anonymous hacker Aubrey Cottle.
SHOW TRANSCRIPT

"I'm here to stop this horrible nightmare that I see as a next generation version of what I started."

You may not know the name Aubrey Cottle. But you’ve probably heard of the hacker collective he helped create:

"This is the public face of Anonymous, the shadowy group behind the hacking attack on the federal reserve," a 2013 TV report said.

Today, he’s fighting a different battle which, like Anonymous, was born online and through anonymity: QAnon.

"As far as the brainwashing and general disinfo campaigns that are the core of QAnon go, I understand all of that implicitly because I helped write the playbook for it in the first place," Cottle tells Newsy.

The conspiracy theory claims a group of elite pedophiles are plotting against President Trump. Some of its followers have been linked to real-life violence. Cottle says as part of his efforts, he’s investigating a key figure — Jim Watkins, the owner of a message board where the purported official named ‘Q’ has posted.

Cottle recently tipped a news organization that later reported Watkins was tied to child pornography domains -- an allegation he denies. Cottle also says he’s investigating suspected QAnon support by foreign governments and that he gets information from friends at Twitter, Facebook, and Google. But the vigilante tactics can be controversial...

"I'm doing a lot of stuff that I can't legally disclose," Cottle says.

Several Anonymous hackers have been arrested over the years.

"I do think that these current Anonymous activists will do a good job in unearthing any dirt that exists among those QAnon movers and shakers. Whether that's enough to take down a movement that has now taken hold in a kind of grassroots sense is a bigger question, and I think that will be quite hard to do."

Gabriella Coleman, an expert on Anonymous, calls Cottle’s mission a sort of redemption for the 33-year-old Canadian.

"He was part of the kind of troll group that was really attached to the name Anonymous as a phenomenon for harassment and trolling. I think he really had a reckoning about his past," Coleman tells Newsy.

"When did you decide to stop being anonymous and just come forward?" national security reporter Sasha Ingber asked him over Skype.

"The week the Christchurch, New Zealand shooting happened, so August 2019," he said.

"A gunman with an automatic weapon opened fire on a mosque in central Christchurch," a CBS News report from the time said.

The attack left 51 people dead and pushed Cottle to think of ways to help ex-QAnon followers get back into society.

It opened his eyes to the consequences of hate online.

"You feel it. You feel it right here. It's actually really painful," Cottle says. "You hear the stories of all the families out there that have lost a family member to it or even, you know, people taking their own lives or they're taking other people's lives. That just increases my level of urgency of dealing with this."